BOSTON, Sept. 24 /Christian Newswire/ -- Saturday marks the 30th anniversary of the formation of China's One-Child Policy, and for millions of fathers and mothers affected by its rigid enforcement, the day is anything but a happy occasion. Though most Americans are unaware of the hundreds of millions of deaths and abandonments that have occurred as a result of this policy, one organization is on a mission to both reveal the injustice of this policy and restore value to girls in China.

All Girls Allowed (AGA) was founded by Chai Ling, two-time Nobel Peace Prize Nominee and former chief student leader in the 1989 Tiananmen Square Movement. The organization works to support Chinese families in villages with the greatest gender imbalance (sometimes up to 100 girls born for every 130 boys), and spreads awareness of human rights violations and the issue of gendercide. Visitors to AGA's website can send a baby shower gift to ensure a baby girl has a chance at life, sponsor orphaned girls' education, sign a pledge to support girls' value, and find resources about the One-Child Policy. AGA is co-hosting a press conference to discuss this tragic anniversary today on Capitol Hill, featuring Congressman Chris Smith, former political prisoner Harry Wu, AGA founder Chai Ling and Reggie Littlejohn (Women's Rights without Frontiers). 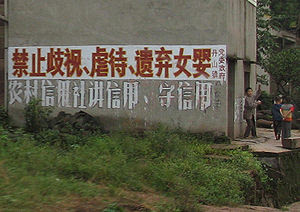 Today in China, an alarming gender imbalance exists. Millions of Chinese men struggle to start families but fail to find brides. The Chinese government reports an average of 120 boys born for every 100 girls. The Chinese Academy of Social Sciences reports that in 2020, there will be 40 million more young men than women; by comparison, there are currently 40 million young men in the entirety of the U.S. Not surprisingly, China's crime rates and the prevalence of women and child trafficking have risen dramatically. Many respected economists have begun to voice concern over the volatile state of China's "demographic timebomb", and while the policy was originally set to end on September 25, 2010, it remains in place with very little change. For interviews, contact Tessa Dale at tessa@allgirlsallowed.org , 1 (617) 275-9176. www.allgirlsallowed.org.
Zemanta helped me add links & pictures to this email. It can do it for you too.
Posted by Deacon John at 1:55 PM