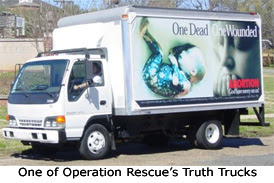 Szabo stated that the display of the graphic photos of aborted babies depicted on the Truth Truck banners , "as shocking and offensive as they are - does not constitute 'obscene and vulgar or profane language' as specifically prohibited by this statute."

"Apparently Ms. Szabo found the letter from our attorney instructional. The law is clear. This was really the only decision that could responsibly be made," said Operation Rescue President Troy Newman. "We thank the American Center for Law and Justice for their excellent work on this case, and look forward to exercising our free speech rights in Georgia without further impediment."

"However, there are still the unresolved matters of the destruction of thousands of dollars of signs by the police and four days that our driver unjustly spent in jail. We are weighing our legal options at this time," said Newman.

Meanwhile, the Truth Truck has been newly refitted with signs similar to those destroyed by police.

Newman presented the keys to the Truth Truck to Bishop Donald Q. Fozard of Mount Zion Christian Church in Durham, North Carolina, during the national Life Education and Resource Network (L.E.A.R.N.) Summit for Life held in Atlanta over the weekend. L.E.A.R.N. is the largest African-American pro-life group in the nation. They work to educate their community about the decimation of the African-American population by abortion.

"We know that this Truth Truck is going to be powerfully used by this group to save lives and educate the public, especially the African-American community, about the tragedy of abortion. We are excited to see the great things that will be accomplished for life by L.E.A.R.N.'s Bishop Fozard and his amazing group."