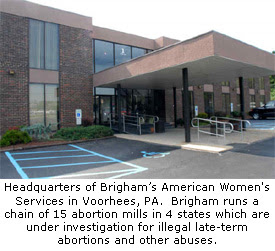 Brigham is not licensed to practice medicine in Maryland and never has been. The state issued a cease and desist order to Brigham on August 25.

On September 1, Operation Rescue sent letters asking that the Maryland Attorney General's office as well as state and county prosecutors file criminal charges against Brigham and that he be held to full accountability under the law. (Read OR's letter to Maryland's Attorney General)

"There is a largely unspoken crisis in this country brought on by abortionists who insist that they are above the law," said Operation Rescue spokesperson Cheryl Sullenger.

"We can no longer turn a blind eye to these abortion abuses and pretend that things like this can't happen in a nation where abortion is legally permissible. Brigham is just one example in an industry where this kind of behavior is the norm and not the exception. We have yet to find an abortionist who does not violate the law.

"Shame on the women's organizations that know this kind of abuse is occurring, yet continue to cover up for abortionists. If groups like NARAL and the NAF really cared about women, they would work night and day to close these abortion chop shops and offer real solutions to pregnant women that does not include submitting them to abortionist quacks."

Three weeks ago, physician Steven Brigham led a car caravan of patients from his Voorhees abortion clinic to his facility in Elkton, Md. After one of the patients was critically injured during her surgery there, Brigham put the semiconscious, bleeding woman into the back of a rented Chevrolet Malibu and drove her to a nearby hospital emergency room rather than call an ambulance.

Those details are contained in documents issued over the last 10 days by the Maryland Board of Physicians and Elkton police. The two agencies have launched a wide-ranging investigation into Brigham's long-troubled abortion business, which he conducts in New Jersey, Pennsylvania, Maryland, and Virginia.

On Aug. 25, the Maryland Board of Physicians ordered Brigham, 54, to stop performing abortions in that state, where he has never been licensed to practice medicine. By then police had raided Brigham's Elkton facility – from which they said they removed 35 "late-term fetuses and fetal parts" – as well as the Voorhees headquarters of his chain of 15 clinics, which does business as American Women's Services.
END_OF_DOCUMENT_TOKEN_TO_BE_REPLACED