From http://cal-catholic.com/
Will Jerry Brown Make Loyola and Santa Clara pay for abortions? 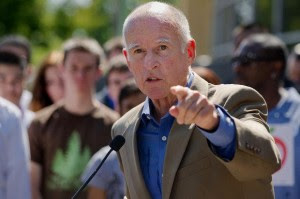 Photo of Brown in message urging Santa Clara students to vote lists him as 1959 Santa Clara alum
The following comes from an Aug. 11 story on SFGate.com.
California has some of the nation’s strongest protections for abortion rights. But the recent decisions by two Catholic universities, Santa Clara and Loyola Marymount, to eliminate most abortion insurance coverage for their employees were cleared in advance by state agencies.
Now Gov. Jerry Brown‘s administration is taking another look.
The state Department of Managed Health Care is conducting “an in-depth analysis of the issues surrounding coverage for abortion services under California law,” said Marta Green, the department’s chief deputy director.
What the department is reconsidering, as first reported by California Lawyer magazine, is whether the universities are violating a 1975 state law that requires managed health plans to cover all “medically necessary” procedures.
Until the current controversy arose, insurers in California had treated all abortions sought by women in their health plans as medically necessary.
Insurance coverage for abortion is not mandated by the federal health care law or by the laws of many other states. But California guarantees abortion rights both by statute and by privacy protections in the state Constitution. The courts have also required Medi-Cal to pay for poor women’s abortions, overturning legislative attempts to cut off the funding.
Under the 1975 law, private insurance coverage for abortions had been routinely provided for decades in California, until the two universities disclosed their planned cutbacks last fall.
In nearly simultaneous announcements, Santa Clara University President Michael Engh and Loyola Marymount University‘s board of trustees told faculty and staff members that they would no longer be insured for “elective” abortions – those not needed to protect a woman’s health.
Santa Clara’s policy change is not scheduled to take effect for its employees until next year, which means it will be blocked if the Department of Managed Health Care decides all doctor-approved abortions are medically necessary. Loyola Marymount, which is in Los Angeles, put its plan into effect this year for its employees, with a partial accommodation that allowed them to pay extra for abortion coverage through a private administrator.
….A prominent faculty member who opposes the Santa Clara cutbacks said the university told employees it was relying on a decade-old antiabortion statement by the Jesuit Order of the United States, a pronouncement that has not been followed by any Jesuit colleges except Santa Clara and Loyola Marymount….
To read the entire story, click here.
Posted by Deacon John at 1:19 PM