Dear Deacon John,
Ten years ago ... after we held the first-ever 40 Days for Life campaign ... we thought it was just going to be a one-time effort. But since then, God has taken this campaign from Bryan/College Station, Texas to places no one could have imagined. It has seen blessing after blessing ... with lives saved from abortion, abortion centers closed ... and even the hardest hearts touched and transformed. Only God could do this! We wrap up this campaign with a look at three countries where 40 Days for Life is growing rapidly – Mexico, Romania and Croatia.
Mexico 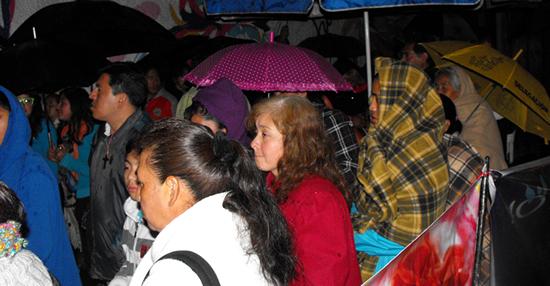 Steve Karlen, the North American outreach director for 40 Days for Life, describes the Mexican campaigns in one word: “intense!”
“The local leaders are keenly aware that abortion isn’t something Mexico City wants,” said Steve, who is attending closing rallies. “It’s been imposed through significant pressure from other countries.”
The response to 40 Days for Life has been amazing. At a Friday night event, Steve said “it was raining, and there were still more people than we could count. People took a two-hour bus ride to come pray.”
This vigil is at outside a Marie Stopes abortion facility in Coyoacan, which mysteriously shut down about three weeks ago.  The leaders hope the closure is permanent … but their vigil continues.
This campaign has recorded five saved babies ... including a set of twins.
The other vigils are just as strong. Tere, the leader in Iztapalapa, said there are often as many as 30 people praying, and the local bishop has asked every church to participate.
Romania

Dan and Julia are the campaign directors for a first-time campaign in Cluj-Napoca, one of the largest cities in the country.
“The leader of the pro-life movement in Romania is astonished they achieved such an amazing task of doing a campaign in a textbook fashion and wants to know how they did it,” said Robert Colquhoun, the international outreach coordinator for 40 Days for Life.
Around 600 volunteers have participated so far in 40 Days for Life … and there are 10 different cities interested in hosting their own campaigns.
“There are many shy Christians in Romania,” Robert said, “so 40 Days for Life is certainly counter-cultural and counter-intuitive for them. Many people are amazed that the Orthodox believers also came to pray and they have had a real talent encouraging Christians to pray together, ecumenically.”
He said they’ve run an excellent campaign, “which sets a great precedent for the country ... and I expect many spiritual fruits and blessings as a result.”
Croatia

Ante Caljkusic, who brought the first 40 Days for Life vigil to Zagreb, has watched as the outreach has now spread to ten cities in his country in the past year … and it could expand to 16 or 17 for the next campaign. It may be spreading to adjacent countries as well.
The campaigns must be touching consciences. There were protests reported in two cities, Pula and Split. In Pula, volunteers continued their peaceful prayer as women chanted insulting slogans. In Split, a few people showed up to demonstrate … but they were surprised to find around 100 people in prayer!
The 40 Days for Life project, Ante said, is “very simple and very effective. And that’s why we chose it.”
The next campaign runs from September 23 to November 1. Will your community be part of it? Please pray about it as this campaign draws to a close.
Here’s today’s devotional from Fr. Frank Pavone, national director of Priests for Life.
Day 40 intention Let us keep our eyes fixed on the New Jerusalem, where death will be no more.
Scripture He will wipe every tear from their eyes. There will be no more death or mourning or crying or pain, for the old order of things has passed away." He who was seated on the throne said, "I am making everything new!" —Revelation 21:4-5
Reflection Every activity we undertake in defense of the sanctity of life is prophetic, inasmuch as it points to the day when "death will be no more." Every victory we have when an act of abortion is prevented is prophetic of that day when death itself will be definitively conquered. Every triumph of grace in this world, whereby someone is brought to see the value of life and given the strength to welcome it, is a breaking into our history of that definitive future in which the old order of things will have passed, and all things will be made new. As pro-life warriors, we must keep our eyes fixed on heaven, and our hearts secure in the hope that the day is coming when all evil will be conquered. It is the future that shapes the present; it is victory that informs the battle; it is the destination that determines the journey. Daily, we are called to reflect on heaven. When we weep, we are to think of the day when every tear will be wiped away. When we face the destructive power of death, we are to think of the day when death is swallowed up in victory. When we labor against abortion, we are to think of the day when we will have the rest and peace of the final triumph of life. Heaven is as real as earth, and its joys will be as real as our present sorrows.
Prayer Father, you are the God of hope. Your word fills us with the vision of the world to come, when every tear will be wiped away, and death will be no more. Father, how we need that hope, how we are strengthened by that vision! Keep our hearts focused on heaven, and diligent in the labors of earth. As we struggle against the culture of death, root our souls in the assurance of victory. We pray through Christ our Lord, Amen.
Printable devotional To download today's devotional as a formatted, printable PDF to share:
http://40daysforlife.com/media/day40.pdf
For life,
Posted by Deacon John at 10:06 AM