Dear Deacon John,
I have met many former abortion workers who say they were both enamored – and troubled – when nuns prayed in front of their workplace. Nuns bring simplicity, joy, and the love of God to any situation. That is certainly true for the Sisters of Life in New York, who in many ways assist moms and their children before and after birth. It is tough work; but you will be inspired by today’s report, where these faithful sisters counsel the mother of a 22-week baby who was scheduled for an appointment at one of New York City’s most notorious abortion facilities.
Manhattan, New York 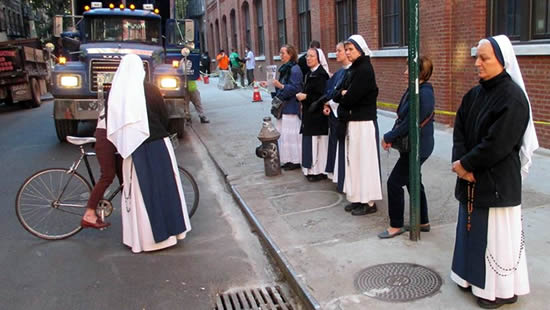 “The turnarounds keep coming!” said Jill in Manhattan, who coordinates the 40 Days for Life vigil outside Planned Parenthood on Margaret Sanger Square.
A woman who was heading into Planned Parenthood stopped to take a brochure … and told the counselors she was 22 weeks pregnant.
They spoke for a while, Jill said, “but the woman kept saying that she was not going to change her mind about having an abortion because of complicated circumstances.”
The counselors put her on the phone with the Sisters of Life, who spoke to her for an hour. She changed her mind about going into the abortion facility … and took the subway to meet with the sisters.
“Talk about turning from death to life!” Jill said. “Our prayers are working. And we can see the importance of being a prayerful witness right outside the abortion center.”
The prayer volunteers, she added, “are the last lifeline for these women who have no place else to turn.”
Tempe, Arizona 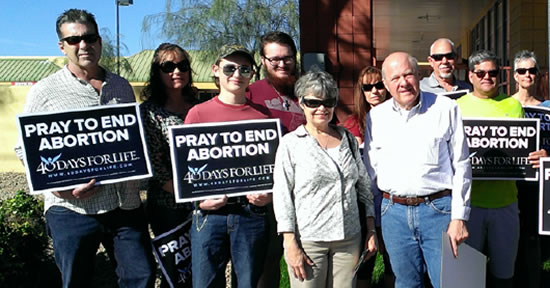 Lisa and other 40 Days for Life prayer team members arrived at Planned Parenthood, expecting to see a full parking lot.
“Not today!” she said.
On a typical Thursday, Planned Parenthood is open from 8 to 2 and clients arrive through the day. On this day, one woman walked up to the door – and it was locked.
She read a sign on the front door and began to make a phone call. A volunteer tried to speak to her, but she returned to her car. An employee opened the door and looked out, but the woman stayed in her can and then drove off.
“Definitely not a typical abortion day in Tempe,” Lisa said.
There was a similar slowdown during the 40 Days for Life campaign two years ago, when Planned Parenthood started closing on Mondays. They no longer open at all on Mondays. “Let us pray this will be the case for Thursdays.”
San Jose, California
Ricky said he was praying with three other 40 Days for Life volunteers outside a Planned Parenthood facility in San Jose.
A young woman of high school or college age arrived with an older woman, most likely her mother. They drove into the lot and parked. They got out of their car, but then just stopped.
They looked over at the people praying … then just stood outside the car talking to one another.
“After about ten minutes,” Ricky said, “they hopped right back into the car … turned right back around … and did not enter the facility.”
Who knows why they were there? Who knows what they were talking about? Only God knows for sure. But prayer is powerful. And God listens.
Today’s devotional is from Rev. John Ensor of PassionLife.
Day 32 intention As we pray for the end of abortion, let us pray for the expansion of the pregnancy help center movement worldwide.
Scripture The dragon stood before the woman who was about to give birth, so that when she bore her child he might devour it. She gave birth to a male child, one who is to rule all the nations with a rod of iron, but her child was caught up to God and to his throne. — Revelation 12:4-5
Reflection from Rev. John Ensor You don’t need to be a theological scholar to get the essential point of Revelation 12. Something big is afoot. It has something to do with the birth of Christ and the children of God. It involves a war in heaven, with powers and principalities beyond our expertise. But the battles are fought here on earth. The crux of the matter centers around the babe of Bethlehem and the cross of Calvary. It continues to unfold down through the ages, through us, the children of God, who put their faith in Christ and take up their cross and follow him. We are waging a war of love against all things that destroy body and soul. The intensity waxes and wanes, but like labor pains, they grow and culminate in new life. The unleashing of legal abortion nearly 40 years ago stirred up prayer (lamentation really). Many were then led to start pregnancy help centers and maternity homes. Today there are over 3,000 such ministries that did not exist 40 years ago. They reflect a movement of God on our watch: Christians driven to give their time and charity to end abortion one woman at a time. Let’s pray this movement expands worldwide. Let's pray for thousands more Christians to start, serve and support pregnancy help centers.
Prayer O God, from generation to generation, you have called your people to be the very aroma of life amidst a culture of death. Now it is our turn. Prepare me. Send me. Use me. I am eager to do my part. Stir your people everywhere to take up this great work.
Printable devotional To download today’s devotional as a printable PDF to share with friends: http://40daysforlife.com/media/day32.pdf
For life,
Posted by Deacon John at 11:57 AM