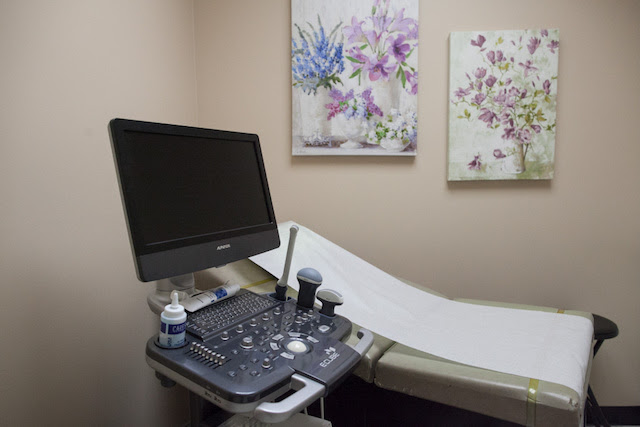 The Women’s Pregnancy Care Clinic in Pasadena, Calif. offers basic services like pregnancy tests and ultrasounds. Women must go elsewhere if they choose to terminate a pregnancy; the center does not provide referrals. (photo: Susanna Tam/KPCC)

Does it violate free speech?

The Supreme Court is weighing whether to hear an anti-abortion group’s challenge on free speech grounds to a California law that requires “crisis pregnancy centers” — which advocate alternatives to the procedure — to also advise clients that the state offers free or low-cost contraception and assistance in ending their pregnancy.
The justices could announce as early as Monday whether they will hear the case, the latest in a series of clashes pitting the 1st Amendment against the state’s power to regulate the medical profession.
The California Legislature said two years ago that it was concerned that the more than 200 pregnancy centers in California sometimes provided “intentionally deceptive advertising and counseling practices that often confuse, misinform and even intimidate women from making fully informed decisions” about their medical care. The so-called Reproductive FACT Act requires these centers to disclose whether they have medical professionals on the staff and to inform patients that the state offers subsidized contraception and abortion.
Last year, the U.S. 9th Circuit Court of Appeals upheld the law against claims that the disclosures were a kind of “compelled speech” that violated the 1st Amendment.
But three separate appeals are pending before the Supreme Court, including one from the National Institute of Family and Life Advocates, which says it has “over 110 nonprofit, pro-life pregnancy centers” in California.
The justices have considered the appeals for more than three weeks in their weekly conferences, suggesting at least several of them are inclined to hear the cases.
If the court agrees to hear the challenge to California’s clinic-disclosure law, it would be the second major case before the high court this term that arises as a conservative 1st Amendment challenge to a liberal state law — and it comes from the same lawyers.
The Arizona-based Alliance Defending Freedom, which appealed on behalf of NIFLA, also represents the Colorado baker who refused to make a wedding cake for a same-sex couple. The baker seeks a free-speech exemption to the state’s civil rights laws. The high court will hear his case in December.
Full story at The LA Times.

From http://cal-catholic.com/does-it-violate-free-speech/
Posted by Deacon John at 10:35 AM