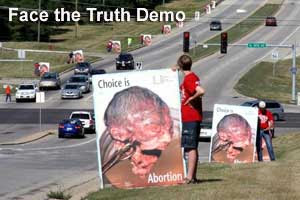 Comments by Fr. Frank Pavone during March for Life 2007 Youth Conference in Ottawa Canada:
Let me leave for you what I am convinced is the most powerful tool to change someone's mind about abortion. I told you that I had been involved in this since I was your age, been working on this fulltime across the world, worked with the Holy Father, and Mother Teresa and all these people, worked with the pro-life movement on every level. There is no single thing that I have seen more powerful to change people on abortion than simply showing them the pictures.
Show them what it looks like. I have challenged the media over and over again. Show the public what an abortion is because we can justify anything with our language. If you are a smooth talker, if you know how to manipulate language and logic - you can convince anyone of anything. But pictures, that is another story.

When people see what abortion does to a baby, they are stung to the heart and their consciences are awakened. I am not just talking about showing pictures of the baby living in the womb. People understand, by and large, that this is a baby in the womb. Now, they will be very surprised at how much the baby looks like a baby, so early in pregnancy when they do see the pictures, the ultrasound or other ways that we have of viewing the child. Many people will be very surprised to see how well-developed that baby is. But, even if you show them the baby, that still doesn't tell them what abortion does to the baby. That is a big difference. Some people think abortion just makes the baby kind of disappear. They still don't appreciate that it is an act of violence. It is only the pictures of the aborted children, torn apart, limb for limb that convince people that abortion is an act of violence.

Now, at my website, we have one of the largest collection of these pictures - it is priestforlife.org. Right on the front we have a statement on our front page that says, "America will not reject abortion until America sees abortion." And that is true for every country. Canada will not reject abortion until Canadians see it and you can make that happen. You have somebody who disagrees with you on abortion - just ask them one simple question, "Have you ever seen one?" And you know what a lot of people will say - "Oh, no, no I don't have to see one but I am pro-choice." Ya, and you are also scared, you are also a coward. You think something should be allowed and you don't even have the courage to look at what you are allowing. You think something should be legal and you don't even have the courage to look at it in the face. Show people, challenge them and let me tell you - as I get emails every day - you will hear people say, "I was 100% pro-choice until I saw those pictures." We get emails everyday saying that the people who went to our website and saw the pictures of the babies began to cry and in a minute, they moved from being 100% pro-abortion to being 100% pro-life.There isn't anything more effective - there are all kinds of other things that we need to do, I am not saying that this is the only thing for us to do - I am saying, use this powerful tool. It will convert people, it will make people who are already pro-life more ready to devote themselves to this cause and it will make people who are scheduled to have an abortion, change their minds in an instant.It is powerful.