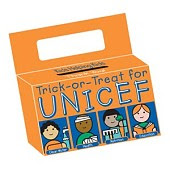 TORONTO, October 30, 2007 (LifeSiteNews.com) - Halloween is here again, and with it the fundraising drive for UNICEF the so-called children's fund of the United Nations which has been mired in abortion support for the last twenty years. The organization has not learned from its past and continues to engage in the anti-life agenda. Earlier this month UNICEF joined Planned Parenthood International and the UN's population control arm UNFPA in sponsoring a women's conference, one thirds of which was dedicated to promoting abortion. (http://www.lifesite.net/ldn/2007/oct/07101201.html )

UNICEF has been implicated in population control and "family planning" measures for many years as thoroughly documented in Winnifred Prestwich's 1993 pamphlet UNICEF Guilty as charged. The organization descended even further in 1995 when Carol Bellamy, a radical pro-abortion activist, became the executive director of the organization, a post she held till April 2005. From her elevated position, Bellamy turned UNICEF into a more direct force behind the promotion of abortion and abortifacient contraceptives working hand in hand with the notorious UN Population Fund (UNFPA) in such activities. (See LifeSiteNews.com's archive on such UNICEF activities: http://www.lifesite.net/waronfamily/unicef/ )

The change in focus at UNICEF quickly became apparent causing the Vatican's UN Mission to issue a press release in 1996 noting that it was withdrawing its symbolic donation of support to UNICEF. The release noted that UNICEF had "begun to divert some of its already scarce economic and human resources from the care of the most basic needs of children" to abortion supporting activities. (see the Vatican release: http://www.lifesite.net/waronfamily/unicef/vatican1196.html )

Jim Hughes, Vice President of International Right to Life Federation suggested that pro-lifers use the opportunity to give support to international aid organizations assisting mothers and children in the developing world, and at the same time respect the right to life.

Pro-life supporters looking for a home for their donations can also send assistance to LifeSiteNews.com directly through our website: http://www.lifesite.net/contribute/