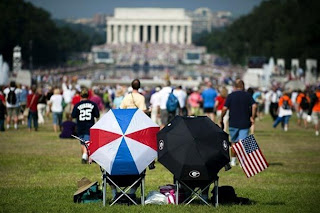 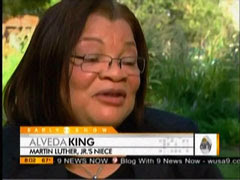 I can't explain what I felt as I watched Dr. Alveda King bounding down the steps of the Lincoln Memorial steps to deliver her speech, "I Too, Have a Dream."

In the moments before I was introduced, I was taken back 47 years to when I was eight years old. I remember that day vividly--sitting on the floor, my back leaning against my father's chair. My eyes were glued to the television. Dr. Martin Luther King had become my hero, he was a deliverer. Even then, my parents seemed worried about his future--would someone try to silence this man of God? Unfortunately, it did happen -we all lost him.

Eventually, it became evident we had to strive to make "the dream" a reality so that Dr. King's death would not be in vain. We became energized for a few seasons, I think. The world was changing and black Americans knew that if they stayed the course--they might just get there. Many of the Black clergy awkwardly stepped forward in an attempt to fill the void left by Dr. King and his murdered brother Rev. A.D. King; but it never happened.

The Reverend Jesse Jackson tried and was believable for awhile as his star began to rise with "I am somebody" and his powerful writings against abortion.

More and more black ministers wanted the adulation Dr. King had, as they all vied for his coveted "leadership" role.

Growing up, I was saddened to see them drop like flies--becoming sell-outs to immorality. Sidelining their worship of God, many chose power, greed and money instead. Men of God became less and less Godly--some became God-less.

Jesse Jackson, the once adamant supporter of all children born and unborn--switched tracks to board the abortion train. That train has brutally killed more than 50 million children since 1973--more than 17 million black children. He became part of America's downfall.

On August 28, 2010, the 47th anniversary of Dr. Martin Luther King's historical speech, I find myself standing beside his niece, Dr. Alveda King as she delivered her amazing speech on the steps of the Lincoln Memorial. My eyes welled--a lump formed--this is what her uncle saw! Looking out over the mall into thousands and thousands of faces, Alveda, my black brothers and sisters and I stood in solidarity--in unity. From the Lincoln Memorial, past the Washington Monument, as far as the eye could see in any direction, American people of all colors stood shoulder to shoulder to honor the one true God--to show love for our great country, a country founded on the Solid Rock which is the word of God--to fix the places where we are broken--to help the weathered masses--to see the humanity of unborn children--to heal the terrible hurts--to lift each other up and to never stand down until the "dream" is restored and I was there.