Operation Rescue is releasing the photos to show the failure of regulatory agencies to protect the public; Calls for emergency inspections of all abortion clinics and massive reforms 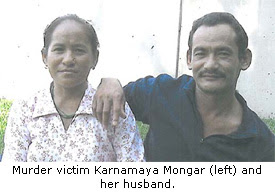 Philadelphia, PA – District Attorney R. Seth Williams released a 281 page Grand Jury Report today that was the basis for murder charges against abortionist Kermit Gosnell and nine of his associates. Included in that report were photos of some of Gosnell’s victims.

We are posting copies of these images so that the full truth of the horrific nature of these crimes can be understood. In the report, the Grand Jury notes that several agencies and groups became aware of what has become known as Gosnell’s “shop of horrors” but did nothing.

Just the day after the death of Karnamaya Mongar, Gosnell had applied for membership to the National Abortion Federations, whose meager guidelines Gosnell could not meet. Even though an NAF staff person spent several days in Gosnell’s abortion mill noting numerous violations, they did not think to report him to the proper authorities.

The grand jury also had a stern rebuke for regulatory organizations who looked the other way, giving their stamp of approval on his criminal practices.

These people who saw the abuses yet stood idly by, or worse, encouraged the behavior that has now shocked the nation bear some responsibility for what happened in Philadelphia. In fact, they deserve criminal prosecution just as much as Gosnell and his cohorts because their silence not only enabled the crimes, but gave tacit consent to them.

Operation Rescue calls for massive reforms in the way abortionists and abortion clinics are handled by regulatory agencies nationwide. Kermit Gosnell’s shop of horrors is certainly not the only abortion mill of this kind in operation in America.

“Operation Rescue calls for immediate emergency inspections of every abortion clinic in the nation. We have often said that if this were to ever happen, no abortion clinic would remain in operation because we have yet to discover one that adheres to all the laws that apply to them. There is no doubt that proper enforcement of the laws already in place would save the lives of women like Mrs. Mongar and babies such as the ones whose tragic images we have posted on our web site,” said Operation Rescue President Troy Newman.

“As the 38th memorial of Roe v. Wade approaches, it is time for Americans to consider the horrors of abortion and demand that government abolish this barbaric practice forever.” 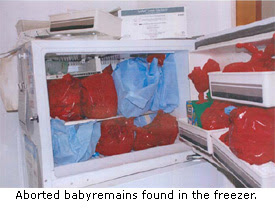 These photos are shocking but if they shock someone into becoming pro-life and they stop someone from having an abortion, Amen!
Dcn John