UNBORN WORD of the day: SAINT JULIANA OF CORNILLON AND THE UNBORN CHRIST CHILD

Saint Juliana of Cornillon and the Unborn Christ Child
February 21, 2011, 12:02 am
Filed under: Saints, The Incarnation, Unborn Jesus 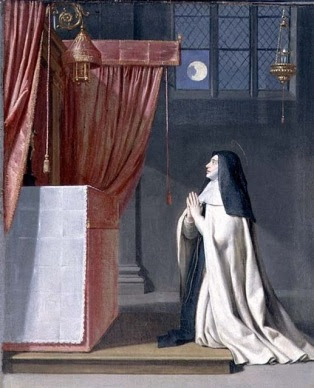 You may have never heard of  St. Juliana of Cornillon (Juliana of Liege), 1192 -1258. She was an Augustinian nun who was the first promoter of a feast day in honor of the Blessed Sacrament.  In his November 17, 2010 audience Pope Benedict spoke eloquently about St. Juliana.

“The Pope explained how the Belgian saint “possessed great culture, … and a profound sense of the presence of Christ, which she experienced particularly intensely in the Sacrament of the Eucharist”.  At the age of sixteen she had a vision which convinced her of the need to establish a liturgical feast for Corpus Christi “in which believers would be able to adore the Eucharist so as to augment their faith, increase the practice of virtue and mend the wrongs done to the Blessed Sacrament”, said the Holy Father.  Click here to read more.

What many people don’t know is that she also had a profound devotion to Christ in His Blessed Mother’s womb.  Here is an excerpt from a book about her life written in 1873 detailing this devotion.

“She had also a great devotion for the feasts of our Lady, but of all her feasts, the one she celebrated with most ardent devotion and piety was the feast of the Annunciation. It seemed as if she could never cease from meditating upon and admiring the celestial simplicity of the words of the angel Gabriel; the trouble that his salutation at first gave to Mary, the consent that she gave to become the Mother of God, the profound humility, the more than angelic modesty, and the ardent love, our Blessed Lady displayed upon this occasion.

At the thought of the Eternal Word descending from the bosom of His Father, and becoming man for love of us, her heart became so inflamed with love, that it seemed to her she could no longer contain it within her breast…

A devotion that she frequently recommended to the other religious, was to recite the ” Ave Maria,” and the canticle ” Magnificat,” nine times every day, in honour of the nine months our Lord dwelt in the womb of His ever Blessed Mother; and she assured them that she was indebted to the practice of this devotion for many favours and graces she had obtained from heaven.

When ever she recited or sung the “Magnificat,” she was accustomed to contemplate the fatigues our Blessed Lady suffered in her journey from Nazareth to the house of her cousin Elizabeth. She then considered the tender embraces of those two women so beloved by God, the joy with which St. John the Baptist leaped in the womb of his mother, at the approach of Mary, who bore his Saviour within her womb; then she meditated upon their holy salutations and the thanksgivings they afterwards rendered to God.”

via unbornwordoftheday.com
Posted by Deacon John at 8:09 PM