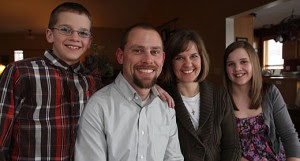 From left, August, Tim, Nicole and Adeline Roach put their trust in God. Photo by Dave Hrbacek / The Catholic Spirit

A sign in the bathroom of Tim and Nicole Roach’s home in Fari­bault reads, “Gratitude, Always Re­member to Count Your Bles­sings.”

“It should say, ‘August, wash your hands and brush your teeth,’” joked Nicole, referring to her 9-year-old son.

The sign has come in handy re­cently as the family, which be­longs to Divine Mercy in Faribault, continues to struggle with Tim’s unemployment, which began in July 2009 when he was laid off of his job as an electrician. And, the couple had to take an even harder look at the concept of gratitude when a huge blessing unexpectedly appeared recently, then vanished in a matter of seconds.

In mid February, Tim, got a call from his local union with the news every laid off worker longs to hear — a job offer.

It couldn’t have come at a better time. Tim’s unemployment benefits were about to run out. He could hardly believe what the voice on the other end was presenting to him —  an offer to be a job foreman for at least 11 months, with a salary of $65,000 to $70,000 a year.

Perfect, Tim thought. Then came the bad news — he would be working on construction of a new Planned Parent­hood Clinic in St. Paul on University Avenue. The highest of highs became the lowest of lows as he quickly turned down the offer.

“The roller coaster started going downhill,” said Tim, 38. “He [union rep] wasn’t really sure if there were going to be abortions there. He kind of sidestepped that, I think, to try to entice me to say yes. But, I said, ‘Wait a minute. It’s a Planned Par­ent­hood.’”

And, just like that, Tim went back to being unemployed with no immediate prospects — and his unemployment benefits set to run out sometime this month. Fortu­nate­ly, his wife, Nicole, 37, has a full-time job as a media specialist for Akin Road Elementary School in Farming­ton. Still, things are tight financially for the family, which also includes 11-year-old Adeline.

Though Tim was quick to turn down the offer — the phone conversation lasted only about a minute — Nicole was slower to embrace his decision, mainly because she works with the family budget and has dealt with the financial stress of Tim’s lengthy unemployment.

“The first thing I wanted to do was justify [taking the job],” she said, when Tim called her moments after he turned it down. “It’s just a clinic. No, it isn’t.

“Through this whole process, our faith has deepened,” she said. “We feel like it was a test of our faith. We chose to stand by our faith.”

To some outside observers, this is another important way of being pro-life. Perhaps, not as direct as picketing an abortion clinic, it, nonetheless, sends a message about the sanctity of human life, says Sharon Wilson, respect life coordinator for the archdiocesan Office of Marriage, Family and Life.

“What struck me most is that he turned it down immediately,” she said. “He had within himself that sort of moral upbringing that had him immediately recognize that this was not the right thing to do [take the job].”

Shortly after making his decision, Tim’s story was sent out via e-mail. It landed on the computer of Father Erik Lundgren, associate pastor of Divine Mercy, who parlayed it into one of his homilies. In the Gospel reading for that Sunday, Jesus tells his disciples that they can’t serve both God and money.

”I just thought it was an inspiring example to everyone in our parish, in the zeal that’s necessary for us Catholics to take into the pro-life debate, the pro-life struggle,” Father Lundgren said. “It’s inspiring to me as a priest. Here at Divine Mercy, the words, ‘Jesus, I trust in you’ are written on our baptismal font, and that’s what it’s all about.”

That’s the kind of trust the Roach family is taking up as Tim continues to look for a job. Ultimately, his goal is to start up his own company, but he will need to earn and save money to make that happen. In the meantime, he is eager to take any work he can find. One asset that both he and Nicole have is a sense of peace that wasn’t there just a few months ago.

“In the last six months, we’ve learned to take our fears and worries and give them to God,” Nicole said. “It’s really changed me and my faith. I feel like I’m proud to be a Catholic and proud to take a stand against abortion.”

Great story of Faith and a man of my own type!
Deacon John