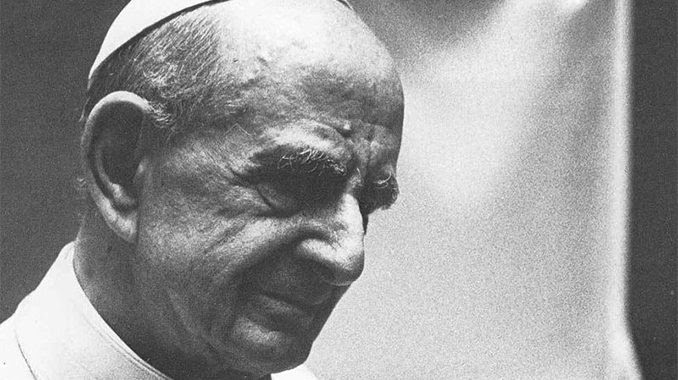 Blessed Paul VI at an audience in October 1977. (Ambrosius007/Wikipedia)

LA Auxiliary Bishop Robert Barron: Pontiff who gave us 'Humanae vitae' nearly 50 years ago accurately predicted the consequences of turning away from the Church’s classic teaching on sex

This coming July, we will mark the 50th anniversary of Pope Paul VI’s deeply controversial encyclical letter Humanae vitae. I won’t bore you with the details of the innumerable battles, disagreements, and ecclesial crises that followed upon this text. Suffice it to say that this short, pithily argued letter became a watershed in the post-conciliar Catholic Church and one of the most significant points of contention between liberals and conservatives. Its fundamental contention is that the moral integrity of the sexual act is a function of the coming together of its “procreative and unitive” dimensions. That is to say, sexual intercourse is ethically upright only in the measure that it is expressive of love between married partners and remains open to the conception of a child. When, through a conscious choice, the partners introduce an artificial block to procreation—when, in a word, they separate the unitive and procreative finalities of the sexual act—they do something which is contrary to God’s will.
I would like to draw particular attention to a remarkable passage in Humanae vitae, namely section 17, in which Paul VI plays the prophet and lays out, clearly and succinctly, what he foresees as consequences of turning away from the Church’s classic teaching on sex. Though he is convinced that artificial contraception is morally bad in itself, he’s also persuaded that it would, in the long run, adversely affect general societal attitudes regarding sex. Here is a first observation:
“Let them consider how easily this course of action could open wide the way for marital infidelity and a general lowering of moral standards. Not much experience is needed to be fully aware of human weakness and to understand that human beings—and especially the young, who are so exposed to temptation—need incentives to keep the moral law, and it is an evil thing to make it easy for them to break that law.”
Does anyone doubt that, in the last fifty years, we have seen a profound attenuation of marital fidelity? Could anyone possibly contest that the last half century has witnessed a significant breakdown of the institution of marriage? Is anyone so blind as not to see that during the last five decades “a lowering of moral standards” has taken place? To be sure, there are multiple causes of these declines, and certainly not all the blame can be ascribed to artificial contraception. However, Paul VI was intuiting something of great moment, namely, that once we commenced to redefine the nature of the sexual act, we placed ourselves on a very steep and slippery slope toward a complete voluntarism, whereby we utterly determine the meaning of sexuality, of marriage, and even of gender. And the rapid rise in pornography use, the sexual exploitation of children, and human trafficking are functions of this same arbitrariness. What was only vaguely envisioned and feared fifty years ago is now accepted more or less as a matter of course.
In that same section, Paul VI continues to prophesy:
“Another effect that gives cause for alarm is that a man who grows accustomed to the use of contraceptive methods may forget the reverence due to a woman, and, disregarding her physical and emotional equilibrium, reduce her to being a mere instrument for the satisfaction of his own desires, no longer considering her as his partner whom he should surround with care and affection.”
In the post-Weinstein era, we hear practically every day of another celebrity who has treated women with disrespect, turning them indeed into objects for his own use and manipulation. The entire society is rightly outraged at this behavior, but precious few cultural commentators have noted the link between this kind of objectification and the conscious disassociation of the twin ends of the sexual act. When we are permitted casually to separate love from procreation—or as one analyst had it, to sever the link between sex and diapers—we place ourselves on a short road to reducing sexual intercourse to a form of self-indulgent recreation.
Section 17 of Humanae vitae concludes with a startling act of prescience regarding the political implications of countenancing artificial contraception:
“Finally, careful consideration should be given to the danger of this power passing into the hands of those public authorities who care little for the precepts of the moral law. Who will blame a government which in its attempt to resolve the problems affecting an entire country resorts to the same measures as are regarded as lawful by married people in the solution of a particular family difficulty? Who will prevent public authorities from favoring those contraceptive methods which they consider more effective? Should they regard this as necessary, they may even impose their use on everyone.”
What might have seemed exaggerated, perhaps even slightly paranoid, in 1968 is now a commonplace. The HHS Mandate, which would require even Catholic institutions to provide insurance coverage for contraception and abortifacients, has been so aggressively pursued that even the Little Sisters of the Poor found themselves battling for their rights in court. Pope Francis, an ardent admirer of Paul VI, has picked up on this theme, bemoaning the “ideological colonization” that takes place when the Western powers attempt, through threat of economic sanctions, to impose their sexual program on the underdeveloped world.
Full story at Catholic World Report.
Posted by Deacon John at 11:05 AM