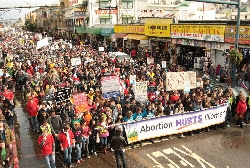 Frank Lee, coordinator of Asian Americans Pro-Life, led the rally in a prayer at the start, saying: "Every life is precious and should be cherished. We have a tough battle in front of us, but we shall overcome when we combine our efforts to make it a perfect whole!"

One hundred and twenty Catholic seminarians carried banners and Tom Martin, who worked for former San Francisco Mayor Willie Brown before entering the seminary, said: "It's a great opportunity for the people of God to see that the seminarians are joining with them not only in praying for life, but also taking a stand."

Speakers included Abby Johnson, who worked for Planned Parenthood for eight years, walked away from her job as a Planned Parenthood clinic director in October after assisting in an abortion. Johnson said: "If you are here, you are an activist. We can no longer just say the words but must put our words into action." Johnson joined 40 Days for Life, a national prayer and fasting campaign outside abortion clinics. The Walk presented the St. Gianna Molla Award to David Bereit, national campaign director of 40 Days for Life.

Lila Rose of Live Action said "The fact that we have allowed abortion in this great nation, the killing of the most defenseless and weak among us has resulted in the greatest human rights abuse I believe our nation has ever seen. It is up to us to stand, raise our voices, and protect the smallest."

"If ever there was a time to 'seize the moment' in the interest of unborn babies, it is now," Evangelical preacher, author and theologian, Pastor Jim Garlow of San Diego, told the rally.

The Reverend Clenard Childress, founder of BlackGenocide.org, said "There is an obvious shifting in our culture and it stems from advances in the pro- life movement."

Walk for Life co-founder Dolores Meehan said "The tenacity of pro-lifers, showing up in their tens of thousands, despite a downpour, is a testimony to their commitment!"

The Walk for Life West Coast was started by a group of San Franciscans in 2005 to affirm the right to life from conception to natural death and particularly to change hearts hurt by the violence of abortion.