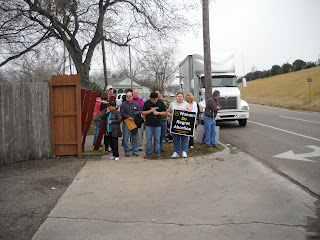 Father James Farfaglia, pro-life priest from Corpus Christi, Texas and board member of Human Life International, found himself this morning as a mediator between an 81 year old anti-abortion protester and arresting police officers.

While Father Farfaglia was leading prayers at the Coastal Birth Control Center owned and operated by abortionist Dr. Eduardo Aquino, one of the priest's supporters attempted to deliver a message to the center's owner. The individual's name is Cliff Zarsky, a veteran in the pro-life movement who was born during the Calvin Coolidge administration. Zarsky is a well known local attorney and former president of the Corpus Christi City Council. This morning the 81 year old attorney was taken to jail by police officers for "criminal trespassing." After many years of personal legal research Zarsky now believes he has found a chink in the Supreme Court armor regarding the controversial Roe v. Wade decision. 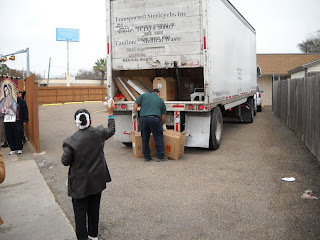 Shortly after 9:30 AM in the morning Zarsky entered the abortion clinic property knowing that it would be considered trespassing. Two police cars quickly arrived and officers confronted Zarsky asking why he was on private property. While this was happening a "medical waste" truck with a sign on the truck reading, "Stericycle, Lake Forest, IL." pulled into the abortionist's parking lot. In his haste to enter the parking lot the truck driver almost backed into a plum-colored van with a woman and children inside. The driver then got out of his truck, went into the clinic and came out with two large boxes. He walked over to his truck and opened the overhead door to reveal a cargo of specially made cardboard boxes with handles on the top neatly stacked from floor to ceiling. Since the boxes were not flat and were stacked neatly, an observer would assume that "medical waste" was inside them. Certainly "medical waste" from the Aquino clinic was inside the two bread box-sized cardboard boxes the driver was carrying. The driver then placed the boxes into the open truck as people on the sidewalk gasped. Amidst prayers and holy water sprinkling from the near-by group of about 50 onlookers, the driver left.

Meanwhile, the two police officers were in a quandary over the Zarsky situation. Both identified themselves to a local reporter as "Christian police officers." They had given a stern warning to the 81 year old lawyer, and then planned to release him on the spot if he would just go away. Zarksy declined the lenient gesture. Then, Father Farfaglia intervened and mediated for almost a half hour until an agreeable resolution was arrived at. 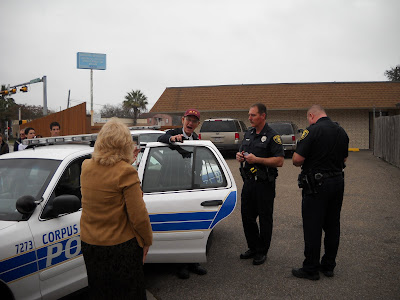 One of the arresting police officers, J.G. Harrison, was clearly conflicted about arresting the frail octogenarian and the officer said that in addition to being a police officer, he was also a pastor of the Cathedral of Palms Church. Father James Farfaglia, also a pastor, assured the well-intentioned policeman that he had to do his duty and Zarsky surely knew what the consequences of trespassing were. Still troubled, the police officers drove Zarsky off to the city jail and triumphantly Zarsky went along with them as he prepares his case behind bars to overturn Roe v. Wade.

Finally, Cliff Zarsky flashed a million-dollar smile across his face when he heard that a pretty blond woman in a white pick-up truck decided then and there not to have an abortion after hearing Zarsky's testimony in the parking lot.