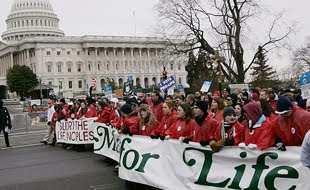 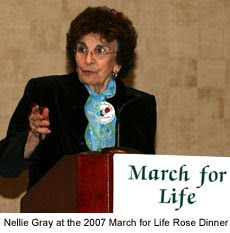 
READ THE BIBLE IN ONE YEAR: http://www.oneyearbibleonline.com/january.asp?version=63&startmmdd=0101

THE TRIB TIMES WILL RETURN NEXT WEEK, GOD WILLING (James 4:15).

(Mat 19:13-14) Then were little children presented to him, that he should impose hands upon them and pray. And the disciples rebuked them. But Jesus said to them: Suffer the little children, and forbid them not to come to me: for the kingdom of heaven is for such.

Pro-life activists flocking to the nation's capital for the 37th March for Life Jan. 22 will be buoyed by recent polls that say they are among the majority of Americans who identify themselves as pro-life.

Organizers of the massive demonstration also have scheduled -- for the first time in its history -- a two-hour rally at Lafayette Park, across from the White House, the evening before the march, in an effort to demonstrate their commitment to the pro-life movement to President Barack Obama.

Although the March for Life is not linked to a particular faith group or ethnic community, a variety of organizations are holding multiple events in the nation's capital and throughout the U.S. in the days surrounding the march.

The National Prayer Vigil for Life, sponsored by the U.S. Conference of Catholic Bishops and the Basilica of the National Shrine of the Immaculate Conception in Washington, will begin with a 6:30 p.m. EST Mass Jan. 21 and conclude with a 7:30 a.m. EST liturgy Jan. 22. Both will be broadcast live on the Eternal Word Television Network.

Can't make it to Washington, DC this year? No problem. Here's your chance to defend life and say "no" to the health care reform bill by signing up for the Virtual March for Life. It's easy. In Step 1, enter your contact information (please enter all required fields, marked with a red asterisk if not completed correctly). In Step 2, create your own "avatar" and invite your friends and family to participate in the Virtual March for Life.

EWTN Complete Coverage of Coast to Coast Pro-Life Events
Priests for Life: Pro-Life Activities in Response to 37 Years of Roe vs. Wade
International Pro-Life Leaders Come to US Capitol to Protest Aggressive US Anti-Life Policies
40 Days for Life Campaigns to Oppose Abortion in 156 Cities

Ladder of Divine Ascent excerpt: Step 25- "On the destroyer of the pasions, most sublime humility"

37. A holy team is love and humilty; the one exalts, and the other, supporting the exalted ones, never fails (1Cor 13:8).     Prayer request?  Send an email to: PrayerRequest3@aol.com