Abortion will flee in the presence of Easter hope. The Lord still walks with his people. 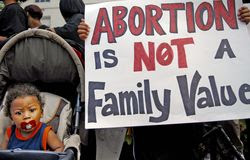 Grief does strange things to us. It can keep us from seeing what is really going on in our lives, and prevent us from recognizing some of the most significant people we know.

On Easter morning, Mary Magdalene stood weeping by the tomb. Jesus himself stood there. But, St. John's Gospel tells us, "she did not know him" and supposed it was the gardener. "'Woman,' he asked her, 'Why are you weeping? Who is it you are looking for?"' The very cause of her grief was about to be removed by the one asking her about it. Little did she know that the reason for her weeping had already been destroyed. The Lord was present.

On Easter afternoon, two of the first Christians were walking from Jerusalem to Emmaus, "discussing as they went all that had happened. In the course of their lively exchange, Jesus approached and began to walk along with them. However, they were restrained from recognizing him. He said to them, 'What are you discussing as you go your way?'" Again, the very reason for their grief had been destroyed by the One now asking them about their grief. The Lord was present and was walking with them. Their hearts began to burn within them.

As the Church continues to deal with the tragedy of abortion, she faces not only a sin against life, but a sin against hope. We do not see 'abortion" walking down the street. What we see is a woman, a child of God, who is caught in the grip of despair. Even if she knows abortion is wrong, as most do, she sees no other way out. She, too, is in grief. She feels she must choose between the baby's life and her life. The prospect of having the child is, psychologically, like a "death" to her: a death to her plans, her freedom, her future.

Grief does strange things. It can blind us to the value of the child.

It can also blind us to the presence of the Lord. He walks with us in our grief, and He asks us to share it with Him so He can remove it forever. Just as the Lord was present on the first Easter to those who thought they had lost Him, so is He present today to those who grieve. He is present to those whose fear and despair are so great that they have their own children killed.

The Lord is present to others through His Church. We, the People of Life, enter into dialogue with the mother tempted to abort. "Why are you weeping?" We learn her needs and fears, and we show her she is not alone. We walk with her, as the Lord walked with His grieving disciples. We provide hope. We speak her name, we break bread with her, we lead her to the company of the other disciples, we bring her to the strength of the Eucharist.

Abortion will flee in the presence of Easter hope. The Lord still walks with his people.

This column can be found online at www.priestsforlife.org/columns/columns2009/09-03-23-easter-hope.htm

Fr. Frank's columns can be heard via podcast.  See www.priestsforlife.org/podcast for more details.