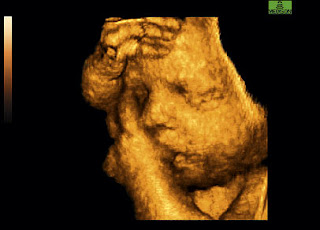 Any high school biology student in 1973 could have given the answer to the key question but the Supreme Court did not feel competent to do so. After denying their ability to answer "the difficult question of when life begins," the Court went on to, in effect, immediately answer it and answer it incorrectly! The Court began at once to speak of the unborn child in conclusionary terms as being a "theory of life" for the first two trimesters of pregnancy after which he or she graduates to the status of a "potentiality of life" during the final trimester. The child was held not to become alive prior to that time! This scheme of things clearly answers the question the Court said it could not answer regarding "when life begins." It answers it by contending that life begins at birth.
Posted by Deacon John at 7:47 PM