"ONLY GOD IS GOD" 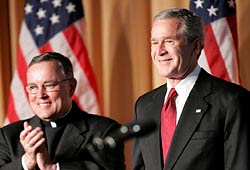 DENVER, Colorado, December 12, 2006 (LifeSiteNews.com) - Denver Archbishop Chaput encouraged a crowd of nearly 700 Christians at the 1st Annual Orange Country Prayer Breakfast to "see clearly" the meaning of Christmas in their lives, but also that they cannot allow secularist forces to redefine the character of America.

"I believe that Americans are a blessed people," said the Archbishop. "Most of us believe in God. We go to church at higher rates than any other developed country. We still work hard. We still have a deep love of family and personal integrity."

However, Archbishop Chaput said that while Americans have so many blessings in abundance, more "than any other country in history", he warned that in the United States, "We face a decline of ideas and public service; growing moral ambiguity; a spirit of entitlement with rights exalted over responsibilities; a cult of personal consumption; and a civic vocabulary that seems to get more brutish and more confused every year."

Chaput then proceeded to explain that words "can form or deform the human conscience," and gave the real meanings of other words that like Christmas, have become victims of years of political correct thinking.

Tolerance and Consensus: "Words like 'tolerance' and 'consensus' are important democratic working principles. But they aren't Christian virtues, and they should never take priority over other words like charity, justice, faith and truth, either in our personal lives or in our public choices."

Choice: "Choice is usually a good thing. But it's never an end in itself. Choice is worthless - in fact, it's a form of idolatry - if all the choices are meaningless or bad."

Pluralism: "These days pluralism usually serves as a codeword for getting Christians to shut up in the public square out of some misguided sense of courtesy. But pluralism is just a demographic fact. It's not an ideology. And it's never a valid excuse for being quiet about our key moral convictions."

Community: "Community is more than a collection of persons. Community requires mutual respect, a shared future, and submission to each other's needs based on common beliefs and principles. It's not just an elegant name for an interest group. Talking about the 'abortion rights community' makes as much sense as talking about the 'big tobacco community.'"

Democracy: Democracy does not mean putting aside our religious and moral beliefs for the sake of public policy. In fact, it demands exactly the opposite. Democracy depends on people of character fighting for their beliefs in the public square - legally, ethically and nonviolently, but forcefully and without apology."

"Democracy is not God. Only God is God," remarked Chaput, adding, "The passengers in a car can democratically elect to go in the wrong direction. But they're still just as dead - with or without a majority opinion - when they go over a cliff."

However the word that Christians had to clearly understand was secularism, which the Archbishop called "actively destructive" undermining both human identity and community by rejecting "the sacred while posturing itself as neutral to the sacred."

"The American Experiment … is the product of religiously shaped concepts and tradition. It can't survive for long without respecting the source of that tradition. A fully secularized public life would mean policy by the powerful for the powerful because no permanent principles can exist in a morally neutral vacuum."

"We have wealth and power and free time and choices and toys -- but we no longer see clearly who we are, said Chaput. "If we can't find a way to heal that interior emptiness, then as an experiment in the best ideals of human freedom, America will fail."