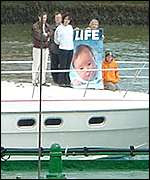 Dutch Abortion Ship to Head for Argentina in 2007

BUENOS AIRES, December 11, 2006 (LifeSiteNews.com) - The Dutch abortion ship is in the news again, this time heading for Argentina. Argentine media have dubbed it the "ship of death" and report that the converted fishing trawler will be coming to Argentine waters to lend its support for the legalization of abortion in Argentina.

The abortion ship is the brainchild of Rebecca Gomperts, an abortionist and political activist from Amsterdam. Gomperts was in Argentina in 2004 promoting legalization of abortion and has been warmly received by some members of the Argentine Congress.

Gomperts' original plan was for the ship to sail to countries where abortion is illegal or restricted and bring women for onboard abortions in international waters outside the 12-mile limit. In 2004, a Dutch court refused permission for this plan but later the Dutch ministry of health allowed the ship to carry the abortion drug, RU-486. As a Dutch-registered vessel, the ship is governed by the law of the Netherlands where there are few if any restrictions on abortion.

Noemí Oliveto and Gerardo Romagnoli, members of the Self-Determination and Liberty party in the Argentine Congress, told media that they are "in communication" with Gomperts and hope for the ship to come to their country in 2007. They said the visit of Gomperts and her ship is being arranged in conjunction "several women's' organizations" who are interested in legalizing abortion in Latin America.

Gomperts, who started her activism with the Greenpeace boat "Rainbow Warrior II," formed a company, Women on Waves in 1997. Since then she has made periodic trips to countries in which abortion is banned or legally restricted, including Ireland, Poland, Malta and Portugal, offering "information, contraceptives, counselling and the abortion pill for very early pregnancies,"

In 2004, Portugal refused permission for the ship to land. Portuguese Secretary of State for Maritime Affairs Nuno Fernandes Thomaz said, "If we accept that third parties come and violate our laws it would become much more difficult to impose authority amongst the Portuguese."

Archbishop of Gdansk, Tadeusz Goclowski was more blunt; when the ship landed, he described the boat crew's objective as "killing Poles." A large demonstration was held at the dock and Poles pelted the ship with eggs and red paint and shouted "murderers," and "Gestapo" at those onboard.

In Malta, government officials vowed to prosecute anyone who assisted Gomperts to procure abortions on Maltese women.

In 2004, Gomperts, a favourite in the abortion and population control movement, was awarded the Margaret Sanger 'Woman of Valour Award' from Planned Parenthood of New York City.

The 'wisdom' of Margaret Sanger
http://www.theinterim.com/2003/feb/13thewisdom.html