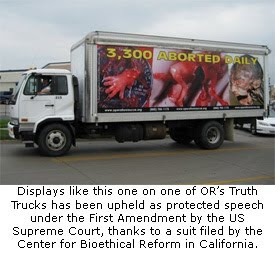 Senator Casey, Filibuster, Health Care and Abortion: Pro-Lifers to Hold Vigil at Senator Casey's Home in P.A. 'Truth Truck' Will be Present. 'A Vote for Cloture is a Vote for Murder by Abortion.'

SCRANTON, Penn., Dec. 18 /Christian Newswire/ -- Pennsylvania Pro-lifers to hold vigil at Casey's home; "A Vote for Cloture is a vote for murder by abortion."

Beginning this evening, December 18, pro-lifers from P.A. will hold a daily vigil at Senator Casey's home in the Scranton area until the vote for cloture.

Diana Roccograndi - from Wilkes-Barre P.A. - states: "Mr. Casey is trying to deceive voters; he knows if he votes for cloture, the bill will pass. If that happens, he will be responsible for causing the death of millions of babies by abortion - payed for with our tax dollars. Such an act from him would be treachery of the highest order against God, the babies, and the voters of Pennsylvania.

"We will not cease our vigil until Mr. Casey votes against cloture, or clarifies his position. We will not be fooled by double-talk and deceit."

Insurrecta Nex (Latin for "Revolution against the slaughter of innocent human beings") is based in Washington DC, and has affiliates around the nation.

Diana Roccograndi recently led a "Cathedral Tour" to 13 Catholic Cathedrals, calling on Catholic Bishops to withhold communion from Catholic Senators who vote for child-killing in the health care bill.