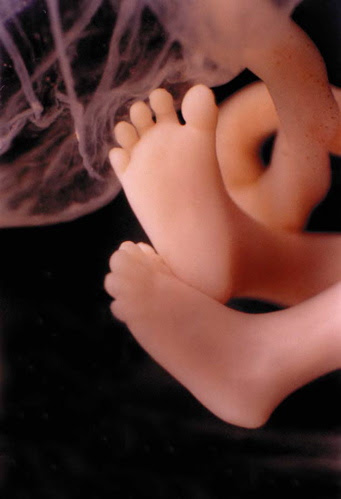 WHEN U.S. pro-life activist Gregg Cunningham presented graphic photos of aborted babies at some Canadian high schools a few years back, abortion "champion" Henry Morgentaler was quick to denounce the presentation as "propaganda that is completely repulsive."

As a member of the media then, I simply could not swallow Morgentaler’s statement. After all, this is the generation that drops $40-$60 bucks on gorey, violent video games; that pays $12 to watch actor Anthony Hopkins eat someone’s brains on the silver screen; that pays $15 bucks to listen to rap stars fantasize the rape of women and murder of cops; or wastes hours watching extreme "reality TV".

Not to mention, the media has gone to great lengths to expose the horror of genocide such as in Nazi Germany, Rwanda, or Bosnia-Hercegovina by capturing painful and graphic images of some of the last centuries’ worst evils. Rightly so.

But while media have risked their lives for these images, they have turned their backs on the painful and graphic photos which reveal mutilated, dismembered, chemically burned babies (view them here or here). The pictures show they are not just blobs of cells. They are babies, with eyes, hands, toes, hair and nerves.

The pictures tell the truth, as does the biological evidence, or the testimony of nurses who admit "we are aborting babies at five months on one floor of the hospital, while fighting to save five-month-old babies on the next." Even some of America’s most prominent pro-choice feminists such as Naomi Wolf now admit that the unborn baby is a person, but maintain women still have the right to destroy it!

The pictures reveal that modern civilization has allowed the destruction of millions of babies in our midst. It is easy to show in our newspapers and newscasts the horrible things citizens or soldiers in far away places do to each other. But our bravest journalists in search of the facts are in denial, refusing to do the unpopular: confront the truth of abortion. It may cost a job. Certainly, it will reap persecution from fellow workers. So, it’s more convenient to simply ride the populist wave, overlooking the truth in the name of "rights". And at what expense? Over 46 million babies destroyed each year—126, 000 people each day, world-wide.

The pictures tell the truth. But the media is mute. The cameras aren’t clicking. The mics are silent. Nobody is willing to tell the story.

Priests for Life: www.priestsforlife.org
The Center for Bio-Ethical Reform: www.abortionno.org