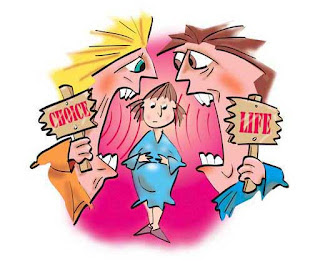 McCain brought up his pro-life record on abortion at the meeting on Thursday, after a discussion about the problem of sexually graphic material on the internet.

"I also would like to say one other thing very quickly to you - that is, I am proud of my record of protecting and advocating the rights of the unborn. I believe this is also an important issue," McCain told his audience, adding that the noblest words ever written were those in the Declaration of Independence that outlined the rights to "life, liberty and the pursuit of happiness."

McCain then blasted Obama for opposing a ban on partial birth abortion.

"My friends, that's a hideous procedure. It should never be allowed any place on earth," he said.

The Wall Street Journal reports, however, that McCain continues to stand by his support for embryonic stem cell research.

McCain told his Union Station audience, "At the moment I support stem cell research [because of] the potential it has for curing some of the most terrible diseases that afflict mankind."

McCain's staunch position on embryonic research is puzzling pro-life voters, however, since to date no therapies have been developed from ESCR, while scientists have indicated that embryonic stem cells have a significant risk of growing into tumours or being rejected by the patient as foreign tissue. On the other hand, adult stem-cell research, which does not involve the destruction of human embryos, has made historic leaps forward in regenerative medicine, yielding numerous therapeutic successes in just the past few years. (http://www.lifesitenews.com/ldn/2008/jun/08061808.html)

In a conference call with journalists, Frank Donatelli, deputy chair of the Republican National Committee, was asked to explain McCain's ignorance of these major scientific and medical advances of adult research and his continued support for embryonic research.

According to Donatelli, McCain is watching very carefully the scientific developments on the matter so that "we won't have to go there."

Why did McCain not Defend Himself on Gay "Marriage" on Ellen's Show? The Official Answer
McCain spokesman Q&A with Catholic journalists answers some interesting questions
http://www.lifesitenews.com/ldn/2008/jul/08071113.html

Breakthrough: Sticks and Stones May Break Bones, but Study Shows Adult Stem Cells Can Heal Them
http://www.lifesitenews.com/ldn/2008/jun/08061808.html
Posted by Deacon John at 11:30 PM