Text of statement by Cardinal George on abortion, election 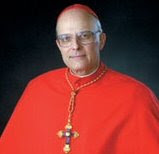 The Bishops of the Catholic Church in the United States welcome this moment of historic transition and look forward to working with President-elect Obama and the members of the new Congress for the common good of all.  Because of the Church's history and the scope of her ministries in this country, we want to continue our work for economic justice and opportunity for all; our efforts to reform laws around immigration and the situation of the undocumented; our provision of better education and adequate health care for all, especially for women and children; our desire to safeguard religious freedom and foster peace at home and abroad.  The Church is intent on doing good and will continue to cooperate gladly with the government and all others working for these goods.

The fundamental good is life itself, a gift from God and our parents.  A good state protects the lives of all.  Legal protection for those members of the human family waiting to be born in this country was removed when the Supreme Court decided Roe vs. Wade in 1973.  This was bad law.  The danger the Bishops see at this moment is that a bad court decision will be enshrined in bad legislation that is more radical than the 1973 Supreme Court decision itself.

In the last Congress, a Freedom of Choice Act (FOCA) was introduced that would, if brought forward in the same form today, outlaw any "interference" in providing abortion at will.  It would deprive the American people in all fifty states of the freedom they now have to enact modest restraints and regulations on the abortion industry.  FOCA would coerce all Americans into subsidizing and promoting abortion with their tax dollars.  It would counteract any and all sincere efforts by government and others of good will to reduce the number of abortions in our country.

Parental notification and informed consent precautions would be outlawed, as would be laws banning procedures such as partial-birth abortion and protecting infants born alive after a failed abortion.  Abortion clinics would be deregulated.  The Hyde Amendment restricting the federal funding of abortions would be abrogated.  FOCA would have lethal consequences for prenatal human life.

FOCA would have an equally destructive effect on the freedom of conscience of doctors, nurses and health care workers whose personal convictions do not permit them to cooperate in the private killing of unborn children.  It would threaten Catholic health care institutions and Catholic Charities.  It would be an evil law that would further divide our country, and the Church should be intent on opposing evil.

On this issue, the legal protection of the unborn, the bishops are of one mind with Catholics and others of good will.  They are also pastors who have listened to women whose lives have been diminished because they believed they had no choice but to abort a baby.  Abortion is a medical procedure that kills, and the psychological and spiritual consequences are written in the sorrow and depression of many women and men.  The bishops are single-minded because they are, first of all, single-hearted.

The recent election was principally decided out of concern for the economy, for the loss of jobs and homes and financial security for families, here and around the world.  If the election is misinterpreted ideologically as a referendum on abortion, the unity desired by President-elect Obama and all Americans at this moment of crisis will be impossible to achieve.  Abortion kills not only unborn children; it destroys constitutional order and the common good, which is assured only when the life of every human being is legally protected.  Aggressively pro-abortion policies, legislation and executive orders will permanently alienate tens of millions of Americans, and would be seen by many as an attack on the free exercise of their religion.

This statement is written at the request and direction of all the Bishops, who also want to thank all those in politics who work with good will to protect the lives of the most vulnerable among us.  Those in public life do so, sometimes, at the cost of great sacrifice to themselves and their families; and we are grateful.  We express again our great desire to work with all those who cherish the common good of our nation.  The common good is not the sum total of individual desires and interests; it is achieved in the working out of a common life based upon good reason and good will for all.

Our prayers accompany President-elect Obama and his family and those who are cooperating with him to assure a smooth transition in government.  Many issues demand immediate attention on the part of our elected "watchman." (Psalm 127)  May God bless him and our country.