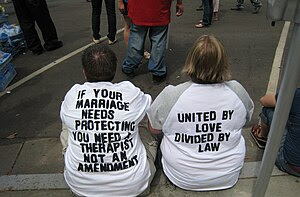 In an attempt to defuse opposition to a planned initiative to repeal Proposition 8 in 2012, an openly homosexual state senator has introduced a bill guaranteeing that no minister, priest or rabbi could be forced to officiate at same-sex marriages, and that churches that refuse to perform such ceremonies would not lose their tax exempt status.

Sen. Mark Leno, D-San Francisco, introduced Senate Bill 906 on Jan. 27. The measure is co-sponsored by two other homosexual legislators – Sen. Christine Kehoe, D-San Diego, and Assemblyman Tom Ammiano, D-San Francisco. On Feb. 11, the bill was referred to the Senate Judiciary Committee for an as yet unscheduled hearing.

Leno, Kehoe and Ammiano are strong supporters of same-sex marriage and vigorously opposed Proposition 8, an initiative adopted by California voters in November 2008 that amended the state constitution to read, "Only marriage between a man and a woman is valid or recognized in California." Backers of same-sex marriage have vowed to try to repeal Proposition 8 via the initiative process in 2012 if federal courts do not invalidate it in the meantime.

Leno telegraphed his intentions in an interview with a Sacramento political newspaper shortly after he introduced SB 906. "If you heard any number of the arguments of the proponents of Prop. 8, you would have thought there were no First Amendment right to freedom of religion," Leno told Capitol Weekly. According to Leno, his measure is an effort "to put to an end some of the nonsensical statements made in support of Prop. 8."

While some proponents of same-sex marriage have favored a repeal effort in the November 2010 elections, more politically powerful backers have said 2012 is their best shot at undoing Proposition 8. In December 2009, the national homosexual advocacy group Lambda Legal said the time is not ripe for a repeal of Prop. 8, calling for "more outreach, education, research and time to change hearts and minds before returning to the ballot to reopen marriage to gay and lesbian couples in California. At least one initiative to restore marriage equality for same-sex couples is currently circulating that, if it qualifies, would appear on the November, 2010 ballot, but Lambda Legal believes that putting this measure to a vote in 2012 is the strongest strategy."