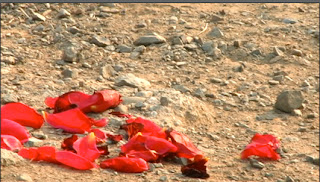 Petals in the Dust
From http://www.calcatholic.com/

A march protesting female infanticide and foeticide in India will take place on Saturday, March 6 in San Francisco. Organized by Bay Area resident Nyna Pais Caputi, the march hopes to raise awareness of the human rights violations against millions of baby girls in India.

In the last century over 50 million girls have been eliminated from India's population. 10 million girls have been killed by their parents either before or soon after birth in India over the past two decades, resulting in an imbalance in the gender ratio -- 927 girls per 1,000 boys. In some regions it is as low as 500 girls per 1000 boys. This has led to an increase in trafficking, sexual abuse and violence against women.

Ms. Caputi, a Bay Area filmmaker, realized the gravity of the situation when she decided to adopt a child from India. She wanted to adopt a girl. “I was told I would have at least a two- to three-year wait for a baby girl. I was surprised to learn that there were long waiting lists of families wanting to adopt girls from India,” she said. “Then the orphanage that I visited in India pointed a lake out to me in the vicinity where baby girls used to be drowned by their parents.”

Ms. Caputi has partnered with social justice organizations Fight-Back, CAPF (campaign against pre-birth elimination of females), Breakthrough, the Pink Pagoda, and other Indian women’s groups to organize walks for missing girls in the cities of Delhi, Mumbai, Pondicherry, Kuwait, Dublin, San Francisco, Melbourne and Ontario on March 6. All marchers across the world will wear black ribbons in memory of the baby girls that have been killed.

The San Francisco walk will start at 11 a.m. in front of the Conservatory of Flowers in the Golden Gate Park and end at the Indian Embassy, 540 Arguello Blvd.

Ms. Caputi is working on a documentary film about female foeticide and infanticide in India called Petals in the Dust: India's Missing Girls. She hopes the walk and film will spur the International and Indian communities into taking action to end this genocide.

For more information, please click here.
Petals in the Dust: India's Missing Girls
A documentary film
Nearly 50 million girls and women are missing from India's population.
In the last 20 years, 10 million girls have been killed by their parents, either before or immediately after birth.
The average ratio of women to men is 927 to 1000 based on the last census in 2001 and in some parts of North India it is as low as 750 women to a 1000 men. The district of Daman in Daman and Diu in the Western part of India has the lowest sex ratio of 591 women to a 1000 men.
Where is the public outcry? Where is the media? Where is the international community?
Petals in the Dust: India's Missing Girls, will explore the reasons behind this skewed sex ratio, it's origin, growth and consequences.
It is the intention of the film to serve as a voice for the women of India, calling attention to female infanticide and foeticide, practices that have lead to the biggest genocide in India’s history.  The U.N. has warned that these acts if left unabated, would lead to an increase in trafficking, sexual abuse and violence towards women.
It is also the intention of the film to create an awareness both in India and globally and bring people together to help protect India's girl children and the women who face atrocities because of the skewed sex ratio.
Currently Petals in the Dust: India's Missing Girls is in pre-production and we are raising funds to complete it. Click here to see the Trailer
Posted by Deacon John at 12:49 PM