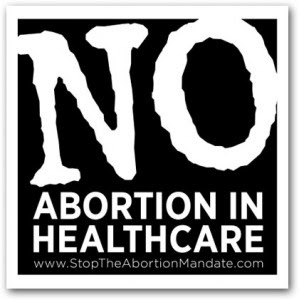 WASHINGTON, Feb. 22 /Christian Newswire/ -- The following statement may be attributed to Douglas Johnson, legislative director for the National Right to Life Committee (NRLC), the federation of right-to-life affiliates in all 50 states.

Any member of Congress who votes for the final legislation proposed by President Obama will be voting for direct federal funding of elective abortion through Community Health Centers, and also an array of other pro-abortion federal subsidies and mandates.

The health bill passed by the Senate in December (H.R. 3590) had become, by the conclusion of the Senate amendment process, the most expansively pro-abortion bill ever brought to the floor of either house of Congress since Roe v. Wade. The Senate bill, as passed, contained seven distinct problems pertaining to abortion policies. (The bill passed earlier by the House, H.R. 3962, contained none of these pro-abortion components, thanks to adoption of the Stupak-Pitts Amendment on the House floor on November 7, 2009, by a vote of 240- 194.) President Obama today proposed "a targeted set of changes to" the Senate-passed bill. None of President Obama's proposed changes diminish any of the sweeping pro-abortion problems in the Senate bill, and he actually proposes to increase the funds that would be available to directly subsidize abortion procedures (through Community Health Centers) and to subsidize private health insurance that covers abortion (through the premium-subsidy tax credits program).

If all of the President's changes were made, the resulting legislation would allow direct federal funding of abortion on demand through Community Health Centers, would institute federal subsidies for private health plans that cover abortion on demand (including some federally administered plans), and would authorize federal mandates that would require even non-subsidized private plans to cover elective abortion.

Here is one problem, offered for illustration: The Senate bill, due to a last-minute amendment, provides $7 billion for the nation's 1,250 Community Health Centers, without any restriction whatever on the use of these federal funds to pay directly for abortion on demand. (These funds are entirely untouched by the "Hyde Amendment" that currently covers Medicaid.) Obama today proposed to increase that figure to $11 billion, but without adding a prohibition on the use of the funds for abortion. (The House-passed bill would provide $12 billion, but in the House bill the funds would be covered by the Stupak-Pitts Amendment.) Two pro-abortion groups, the Reproductive Health Access Project and the Abortion Access Project, are already actively campaigning for Community Health Centers to perform elective abortions. In short, the Senate bill would allow direct federal funding of abortion on demand through Community Health Centers. A memorandum documenting this issue in further detail is posted here: www.nrlc.org/AHC/NRLCmemoCommHealth.pdf

The abortion-related differences between the House- passed and Senate-passed bills are far, far greater than one would gather from reading superficial summaries such as those published repeatedly in the mainstream news media. These thumbnail sketches have tended to focus exclusively and superficially on certain provisions associated with Senator Ben Nelson. NRLC believes that the Nelson provisions are unacceptable, but the pro-abortion problems in the Senate bill go far beyond the flawed Nelson provisions. A letter from NRLC to U.S. House members, explaining the multiple pro-abortion components of the Senate-passed bill, is posted here: www.nrlc.org/AHC/HouseLetteronAbortionProvisions.h tml

The U.S. Conference of Catholic Bishops (USCCB) produced a 13-page memorandum that throws the many unacceptable provisions of the Senate bill into stark relief, which is posted here: www.usccb.org/healthcare/life_conscience.pdf

A substantial number of pro-life Democrats in the House, including some lawmakers whose names have not been mentioned on the various published lists, have told their constituents that they are not going to vote for the Senate-passed bill because of the abortion problems. For pro-life Democrats, President Obama's proposal only makes matters worse. The only thing that would fix the Senate bill on abortion is permanent, bill-wide language that is functionally identical to the Stupak-Pitts Amendment adopted in the House on November 7, 2009.

The Obama proposal also would force rationing of lifesaving medical treatment, a matter that will be the subject of separate comment by the National Right to Life Committee.

NRLC Legislative Director Douglas Johnson and Senior Legislative Counsel Susan Muskett are available to provide comment and analysis on the Obama proposals. Please contact the NRLC Communications Department at (202) 626-8825 to arrange an interview.