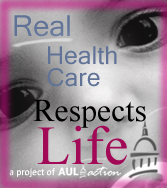 WASHINGTON, Nov. 21 /Christian Newswire/ -- At 8:00 p.m. tonight, the Senate is expected to vote on cloture on the Motion to Proceed to debate on Senate Majority Leader Harry Reid's pro-abortion health care bill. Sixty Senators' votes are needed for the bill to move forward. While this vote has been touted by pro-abortion lawmakers as merely "procedural" in nature, according to the Congressional Research Service, over 97% of bills that require a cloture vote to begin debate ultimately pass the Senate.

Americans United for Life Action President and CEO Dr. Charmaine Yoest said, "Senator Reid's bill provides for an unprecedented expansion of federally- funded abortion. The majority of Americans who oppose federal funding of abortion will not stand for policies that force them into paying for abortions under the guise of health care reform."

Dr. Yoest continued, "The Reid language in the new Senate health care bill is not the Stupak-Pitts language barring federal funds from going to abortion in health care. It is the opposite of the pro-life Stupak- Pitts language. The U.S. Senate must stop this bill from moving forward by voting no on cloture on this anti-life health care bill."

AUL Action Staff Counsel Mary Harned said, "A vote for this motion equals a vote for the anti-life bill. Right now, the bill lacks the strong Stupak-Pitts Amendment language that was added to the House health care reform bill. The Stupak-Pitts Amendment mirrors the Hyde Amendment, in that it prohibits federal dollars from paying for elective abortions or subsidizing insurance plans that cover elective abortions."

Americans United for Life Action will score the vote tonight on cloture as a pro-abortion vote in their annual scorecard. To go to AULA's score letter:blog.aulaction.org/wp- content/uploads/2009/11/Score.pdf

To go to AUL's analysis of the abortion-related provisions in the Senate health bill: blog.aul.org/2009/11/19/reid-releases-pro- abortion-health-care-bill/

AUL Action spokespersons Dr. Charmaine Yoest (President and CEO) and Mary Harned (Staff Counsel) are available for interviews and debates on the threats to life in the U.S. Senate health care bill.

Americans United for Life Action is the legislative arm of Americans United for Life, the first national pro-life organization in America. In 1980, AUL successfully defended the Hyde Amendment before the U.S. Supreme Court in Harris v. McRae. Visit AUL Action's RealHealthCareRespectsLife.com, for background from our legal team about the current health care reform bills threat to the right to life and rights of conscience.