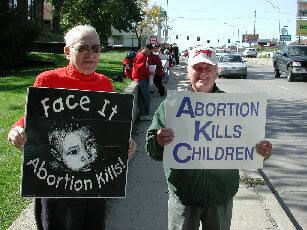 Washington, DC (LifeNews.com) -- After getting national attention last week with comments supporting taxpayer funding abortions and calling the funding a "right," Rudy Giuliani thumbed his nose at the pro-life movement further over the weekend telling them to get over the issue of abortion.

Giuliani, the former New York City mayor, has seen his polling numbers decline slightly because of his wide difference with most Republicans on the issue of abortion.

He's previously indicated that he will let Republican judge him on his track record and stances and determine on their own whether he's qualified to get the GOP nod for president in 2008.

Though merely admitting to a disagreement on the issue before, Giuliani went further this weekend, telling an Iowa newspaper that pro-life advocates should get over the contentious issue.

"Our party has to get beyond issues like that," he told the Des Moines Register newspaper.

He also appeared to indicate that the Republican Party won't gain supporters if it retains its pro-life position.

"Our party is going to grow, and we are going to win in 2008 if we are a party characterized by what we're for, not if we're a party that's known for what we're against," he said.

However, the GOP has nominated pro-life presidential candidates in every race since 1980 and it has won five of the seven contests -- all against pro-abortion Democrats.

Pro-abortion Republican President Gerald Ford lost to Jimmy Carter in 1976 in part because Carter was seen as more conservative on abortion and other social issues.

Polls have also shown that abortion is a winning issue for GOP presidential candidates.

A 2004 Wirthlin Worldwide post-election poll found that 42 percent of voters said abortion affected the way they voted for president. Twenty-four percent of voters cast their ballots for President Bush while 15% voted for Kerry, giving Bush a 9 percent advantage on the issue of abortion.

Eight percent of voters in the Wirthlin poll indicated abortion was the "most important" issue affecting their votes and Bush won among those voters by a six to two percent margin, leading Kerry by four percentage points among the most intense abortion voters.