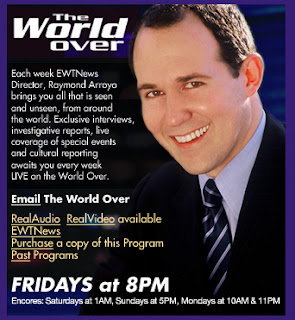 On not Picking and Choosing Morals

WASHINGTON, D.C., April 17, 2007 (LifeSiteNews.com) - At the National Catholic Prayer Breakfast on April 13, EWTN celebrity and best-selling author Raymond Arroyo delighted the nearly 2,000 attendees with stories of EWTN foundress Mother Angelica. Particularly captivating were his very authentic sounding Mother Angelica impersonations which beyond sounding like the saintly nun were in content and tone nearly identical to the original.

In an interview with LifeSiteNews.com, Arroyo explained Mother Angelica's devotion to the pro-life cause. He said that Mother's "own infirmities and being someone who was honestly forgotten and pushed aside by so many people" were motivating factors in that devotion.

In his new book titled "Mother Angelica's Little Book of Life Lessons and Everyday Spirituality" Arroyo writes of a saying of the EWTN foundress noting that there is no greater power in the world than disabled children, children with Downs Syndrome. "Those that we think of as 'less than' - she indicates and, indeed, the Church teaches, are the most precious and these great receptacles of love that we often miss," Arroyo told LifeSiteNews.com. (the book is available from Amazon here: http://www.amazon.com/exec/obidos/ASIN/0385519850/bookstorenow56-20 )

"To my mind," said Arroyo, "Mother Angelica is a great witness to the pro-life cause because - here you had a crippled woman with no real education, in poverty, abandoned by her father at 5 and yet this is the instrument that God uses to create, what is today - the largest religious media empire on the planet."

Asked about his own devotion to a faith which is regarded by some as out of step on issues such as abortion and homosexuality, Arroyo replied, "I think as Catholics we are called to embrace and to defend the full teaching of the Church, in its totality. It all hangs together."

The host of the popular EWTN show The World Over Live which is seen in more than 100 million households each week added: "I have friends who want to pull one thing out or want to exempt themselves from another whether it be contraception or embryonic stem cell research because they have a sick relative or they feel they have enough children." He told LifeSiteNews.com, "We can't do this. Once you begin to pull one thread out, the whole garment begins to unravel. It is one piece. It's a whole cause and vision of life. Its not our vision of life, or your vision of life or Mother Angelica's vision of life - it is God's vision of life and since He is the Creator, we owe him some deference here. I think He knows better than we know."

SAN FRANCISCO, April 17, 2007 (LifeSiteNews.com) - Planned Parenthood Golden Gate (PPGG) has just released a "Safe is Sexy" television ad that features a young couple being interrupted from having unprotected sex by their Guardian Angels. The ad, which will appear on MTV, VH1 and FX, shows a sloppy-looking male angel eating popcorn at the head of the bed watching in delight. Then his female counterpart appears imploring him to do something. He accesses a TV remote and rewinds the scene of the couple in bed. This time the woman asks her male partner if he has any protection, to which he exclaims, "Yeah, of course." She responds, "Amen!"

Catholic League president Bill Donohue commented on this ad saying, "Given the moral hollowness of Planned Parenthood, it is not surprising to learn that it is now in the business of hijacking religious imagery to pander its sex-without-consequences message. But as with PETA before it, the anti-natal salesmen will find that the faithful will tune them out."

Donohue added: "Ironically, while PPGG is ripping off Guardian Angels, the California chapter of Planned Parenthood is lobbying to defeat the 'Missing Angels Act.'"

The bill, which is being pushed by women who have experienced stillbirth, would require a certificate of birth when this occurs. Currently, all states are required to issue a death certificate for a stillbirth; they also require the family to bury or cremate the baby.

Joanne Cacciatore, who heads the Missing Angels Foundation, has said, 'How in the world do states ethically justify telling someone they have to bury someone who they are not willing to say existed?'

"What really galls Planned Parenthood," said Donohue, "is the fear that the bill would help the pro-life movement by acknowledging the humanity of the unborn child; the bill says the fetus must have advanced beyond the 20th week of gestation."

Commenting on the ad on her Dawn Patrol blog, Dawn Eden of the New York Daily News, said "Planned Parenthood has long had a relationship of sorts with the Angel of Death; it invites him into its clinics a quarter-million times a year."