THE COURT HAS SANCTIONED MURDER: 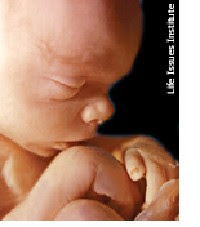 The object of abortion is to eliminate a "person." The intent is to kill the child. Homicide, by definition, is the taking of a human life. Abortion, then, is clearly a species of homicide. As the biologists have a method of classifying life, the lawyers have a method of classifying homicides. Some homicides are not objectionable from a legal perspective. There are, for example, "justifiable homicides" such as self-defense. Where the life of the mother is threatened by the pregnancy an abortion may perhaps be justified under a self-defense rationale (or defense of another rationale). There are also "excusable" homicides, for example, State executions for capital offenses. Regardless of how a person feels about capital punishment as a moral issue, it is nevertheless true that the law regards it as acceptable (i.e., the executioner can not be prosecuted for murder or sued in a wrongful death action). Most abortions, however, fall into neither the justifiable nor the excusable category. Rather, they are homicides of mere convenience. What type of homicide should the law regard them as? Should they be considered murder or manslaughter, for example? The essential element for murder is "malice aforethought."
[Excerpted from 'A Resource Manual']
Posted by Deacon John at 8:03 PM