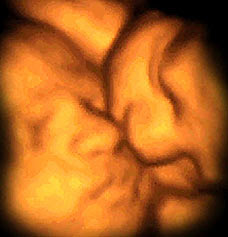 Latin For "Unborn Child"
by Dan Davis,
Christian Research Associates
Denver, Colorado
1. Is the fetus alive?
* If it's not, what is it? Does life arise from nonlife? [Not according to the Law of Biogenesis (Pasteur, Virchow)].
* "This much beyond serious dispute: biological life begins at fertilization, when the female's egg is united with the male's sperm" (Time, April 6, 1981).
* "Potential life" is absurd, an oxymoron (a contradiction in terms). The US Supreme Ct. in Roe v. Wade used this term, unknown in legal terminology, without definition, because it is "less rigid" than considering life to begin at conception [410 U.S. 113, at 150]. Ignoring the scientific evidence as to the beginning of life, the Court dismissed the question: "We need not resolve the difficult question of when life begins. When those trained in the respective disciplines of medicine, philosophy, and theology are unable to arrive at any consensus, the judiciary, at this point in the development of man's knowledge, is not in a position to speculate as to the answer" [Ibid., at 159]. Then they decided: life begins at birth.
* Does this sound like it's not alive? the heart beats (18 days), brain functions (40 days), it responds to touch (6-7 wks), sucks its thumb (2 mo.), breathes (3 mo.), swallows (11 wks), has fingernails (3 mo.), eyelashes (16 wks.), all bodily systems present and working (2 mo.), hearing (14 wks), dreams (17 wks.), has active emotional life (6 mo.).
* At the very least, we should medically accept fetus as alive when brain waves are measurable on an EEG, since authorities accept absence of brain function as definition of death. Brain waves have been measured at 6 weeks. [J. Goldenring, "Development of the Fetal Brain," New England Journal of Madicine, Aug. 26, 1982, p. 564].
{To be continued . . .}
Posted by Deacon John at 9:19 AM

Email ThisBlogThis!Share to TwitterShare to FacebookShare to Pinterest
Labels: THE FETUS