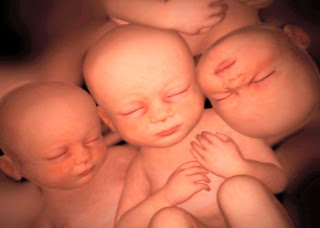 Triplets in the womb
2. Is the fetus a human being?


* If not, what is it? Celery? It's alive and of the human species (homo sapiens).


* "The birth of a human life really occurs at the moment the mother's egg cell is fertilized by one of the father's sperm cells" (Life, April 30, 1965).


* "Since the old ethic [sanctity of life] has not been fully displaced it has been necessary to separate the idea of abortion from the idea of killing, which continues to be socially abhorrent. The result has been a curious avoidance of the scientific fact, which everyone really knows, that human life begins at conception and is continuous whether intra- or extra-uterine until death" [California Medicine 113, no. 3 (1970), pp. 67, 68].


* "Each individual has a very neat beginning, at conception" - - J. Lejeune, discoverer of the chromosomal pattern of Down's Syndrome [Senate Subcommittee on Separation of Powers, Report to the Committee on the Judiciary Regarding the Human Life Bill - - s. 158, 97th Cong., 1st Session, 1981, p.9].


* "No witness raised any evidence to refute the biological fact that from the moment of human conception there exists a distinct individual being who is alive and is of the human species" [Ibid., pp. 11, 12]. "The question of when the life of a human being begins -- when an individual member of the human species comes into existence -- is answered by scientific, factual evidence" [Ibid., p. 3].


* As a 1964 Planned Parenthood pamphlet states: "Abortion kills the life of a baby, once it has begun."