Pope calls for 'no compromise' against 'attacks on right to life' 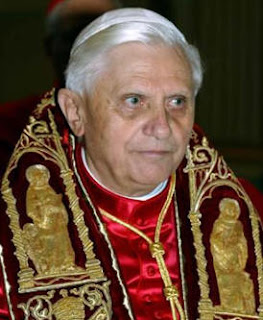 Pope Benedict XVI Saturday called on Catholics to fight "uncompromisingly" against "the many attacks on the right to life" such as abortion, eugenics and euthanasia.
Meeting participants at a congress of scientists and theologians, he said that Catholics should show "courageous conscientious objection" to all practices which put at risk "the value of human life."
In a hard-hitting speech, the Roman Catholic Church leader warned that "attacks on the right to life across the world have expanded and multiplied, taking on new forms."
"The right to life" for all human beings, from its start to its natural end, "is the fundamental right that surpasses all other rights," he said.
He referred to "the ever-increasing pressure for the legalisation of abortion in Latin America and developing countries" as well as abortion pills, "the development of population control" and "a new wave of eugenics in the name of individual welfare."
The pontiff said it was vitally necessary for Christians to obey their consciences "without contradictions, betrayal or compromise."
The pope encouraged doctors, lawyers, politicians and scientists to think about other options "each time the value of human life is at stake."
He also decried legislation being proposed in some countries, including Italy, allowing for the legal union of gay couples.
"All that continues, while at the same time pressures are multiplying for legislation for alternative marriage unions that are closed to natural procreation," he said.
The pontiff spoke of Catholics in secular societies who allow themselves to be convinced by "questionable forms of tolerance" and who are not vigilant enough when it comes to the "seriousness of the problems at stake."
Posted by Deacon John at 9:23 PM