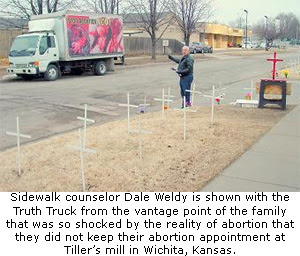 February 13, 2007
Woman with four children had no idea abortion kills a "live" baby
Wichita, KS - A couple who intended to abort their fifth child at George Tiller's Wichita abortion mill changed their minds after seeing photos of aborted babies on Operation Rescue's Truth Truck, which is parked outside the entrance every day the mill is open.
Remarkably, the pregnant woman, Francisca, was unaware that her developing baby was alive even in the first trimester even though she has given birth to four children.
"I am so glad that we found out about it BEFORE we went through with it!" Francisca said. "I kept thinking last night; what would I have done if I found out about this AFTER I already had the abortion?"
"This is not unusual," said Operation Rescue President Troy Newman. "The truth about the development of the baby and the nature of abortion are often kept from women. That's what happens when educational institutions allow the likes of Planned Parenthood to propagandize in the classroom."
The Truth Truck is faithfully driven to the mill each day by Mark Gietzen of the Kansas Coalition for Life, who also coordinates a schedule of nearly 400 volunteers to cover shifts at the mill so there is a pro-life presence every hour the abortion mill is open.
Sidewalk counselors Donna Lampkin and Richard Moss helped direct the couple to Choices Medical Center, a pro-life medical clinic that operates next door to Tiller's abortion mill.
"We often field concerns from well-meaning people about the wisdom of using graphic images, but this story should help people understand how important it is to tell the truth about what abortion does to innocent children. Francisca's situation is not unique. We hear from family after family that the graphic images saved the lives of their babies," said Newman.
OR's Truth Truck fleet is currently on the road saving lives and changing hearts in Washington, California, Colorado, the Gulf States, and beyond, in addition to the steady witness in Wichita, Kansas.
About Operation Rescue
Operation Rescue is one of the leading pro-life Christian activist organizations in the nation. Operation Rescue recently made headlines when it bought and closed an abortion clinic in Wichita, Kansas, and has become the voice of the pro-life activist movement in America. Its activities are on the cutting edge of the abortion issue, taking direct action to restore legal personhood to the pre-born and stop abortion in obedience to biblical mandates.
click here to support Operation Rescue.
Operation RescueWeb site: http://operationrescue.org
E-Mail: info@operationrescue.org
Voice: 1-800-705-1175
"And I have the right to feel so about you all, because I have you in my heart, all of you . . . For God is my witness how I long for you all in the heart of Christ Jesus." (Phil 1: 7-8)
Deacon John
http://www.deaconjohn.org/
http://deaconjohn1987.blogspot.com/
Posted by Deacon John at 1:52 PM