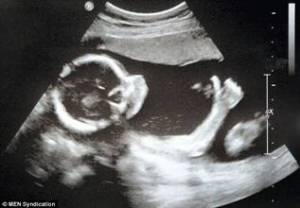 Contact: John Eidsmoe, Foundation for Moral Law, 334-262-1245, info@morallaw.org
MONTGOMERY, Ala., Jan. 31, 2018 /Christian Newswire/ -- The Foundation for Moral Law ("the Foundation"), joined by Personhood Alabama Education, Inc. ("Personhood Alabama") and Proposal 16, jointly filed an amicus brief in the United States Court of Appeals for the Eleventh Circuit yesterday urging the court to protect the lives of unborn children in Alabama. The case, West Alabama Women's Center v. Miller, involves a lawsuit over an Alabama law prohibiting D&E abortions, which involves killing the baby by ripping it apart limb by limb while it is still alive. Federal District Judge Myron Thompson declared the law unconstitutional, and the State has appealed to the Eleventh Circuit.

The amicus brief filed by the three pro-life organizations presented the Eleventh Circuit with two main arguments. First, it argued that Roe v. Wade left some room for the states to decide whether unborn children are "persons" within the meaning of the law, which, by Roe's own terms, would require the child's life to be protected by the Fourteenth Amendment. The second argument reminded the Court that, ultimately, its duty is to obey the United States Constitution, not Supreme Court decisions that are contrary to the Constitution like the Roe v. Wade abortion decision. The brief urges the Eleventh Circuit to reverse the District Court and uphold the Alabama statute that protects the life of the unborn child.

The Foundation is a non-profit legal organization based in Montgomery, Alabama, devoted to the defense of religious liberty and promoting a strict interpretation of the Constitution as intended by its Framers. Foundation President Kayla Moore said, "Every child, born and unborn, has a God-given right to life that nobody may take away. The Declaration of Independence recognizes unalienable rights, endowed by the Creator, that include life, liberty, and the pursuit of happiness. Roe v. Wade enshrines the futile pursuit of false pleasure above the right to life and is therefore contrary to the basic principles upon which this nation was founded. We pray the Eleventh Circuit will allow Alabama to protect the right to life of all persons."

Personhood Alabama is a non-profit organization in Alabama that advocates for the recognition of the personhood of the unborn through legislation and litigation. Bill Fortenberry, the President of Personhood Alabama, said, "One of the reasons that the Supreme Court rejected the argument that unborn children were 'persons' in Roe v. Wade was that the Texas laws at issue in that case did not expressly recognize or treat unborn children as persons. In contrast, the State of Alabama has passed multiple statutes recognizing the personhood of the unborn, and the Alabama Supreme Court has repeatedly recognized unborn children as persons. We hope that the Eleventh Circuit will recognize that unborn children in Alabama have the legal status of personhood, which by Roe's own terms requires the case for abortion to collapse."

Proposal 16 is a non-profit pro-life organization in Alabama that urges Governor Ivey to use her executive power to protect the lives of the unborn. Maggie Ford, Proposal 16's Executive Director, said, "The lives of the unborn are already protected by the Constitution of the United States. The Supreme Court's abortion decisions cannot be reconciled with the Constitution itself, and we hope that the Eleventh Circuit will choose to stand for the rule of law and for life instead of following the Supreme Court's deadly decisions."

Clark also added, "When our country was founded, the rule was that precedents must be followed unless they were plainly contrary to the law itself. The Constitution did not change that, but instead requires every official to follow the Constitution itself instead of Supreme Court decisions when the two cannot be reconciled."
Posted by Deacon John at 5:45 PM