The Larger Picture: Excerpt from 'Inside The Vatican' 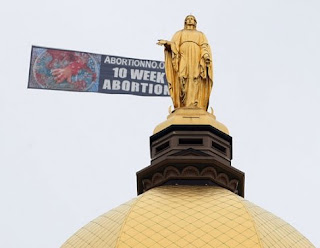 READ THE BIBLE IN ONE YEAR: http://www.oneyearbibleonline.com/may.asp?version=63&startmmdd=0101

(Rom 16:17-18) Now I beseech you, brethren, to mark them who make dissensions and offenses contrary to the doctrine which you have learned and avoid them. For they that are such serve not Christ our Lord but their own belly: and by pleasing speeches and good words seduce the hearts of the innocent.

ARCHDIOCESE OF DENVER: Archbishop Chaput on Notre Dame and the issues that remain

EXCERPT VIA INSIDE THE VATICAN:  The Larger Picture

This is the common conviction of all mankind at all times, except, it would appear, our own.

This ethic is a true "seamless garment" — protect the unborn child (no intentional abortion), protect the newborn infant (no infanticide), protect the child (no abuse of children), protect the young (educate them and nourish them and confer on them all the hopes for a better future), protect the middle-aged (so that they can care for their parents and their children, by ensuring good work at decent pay), and protect the old — honor the old (no euthanasia).

This is an ethic of life.

And the beginning of the ethic, the starting point of the seamless garment, is in the womb, that place of all places which ought to be sacred, and secure, and respected, and not doused with drugs, probed by pincers, cut open, poisoned, scraped, or otherwise disrupted and invaded.

This is true respect for the woman — true feminism.

This is true respect for the human person — true humanism.

And if it took the smooth but ultimately unjust — ultimately unreasonable — words of Obama at Our Lady's university, Notre Dame, to make this crystal clear, then so be it.

The pro-life movement has not lost.

Sometime, generations hence, our descendants will look back in puzzlement and shame at what we have done, and justified, with specious arguments.

Obama could reflect more deeply, and become a true unifier — uniting with the wise and holy men of previous and coming generations, and not with the utilitarians of the present — if he would embrace the ethic of life.

As it is, Obama — like the University of Notre Dame itself — sounds an uncertain trumpet, and is destined, barring a change, to leave a legacy of injustice defended.

Reason and sanity and good sense and love of life will return once again, and human life will be embraced and cherished as a mysterious, priceless treasure, and the civilization which will spring from that cherishing will outshine our present one as the sun outshines the most distant stars.

2. A non-possessive monk is lord of the world. He has entrusted his cares to God, and by faith has obtained all men as his servants. He will not tell his need to man, and he receives what comes to him as from the hand of the Lord.    Prayer request?  Send an email to: PrayerRequest3@aol.com