We Are Under Full-Scale Attack 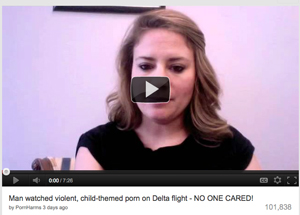 This led to the international group “Anonymous” taking up the cause of attacking Dawn. They somehow got Dawn’s personal cell phone number, as well as her parent’s personal information, and posted it on their website urging people to harass her. Both Dawn and her family have been under sustained attack with threatening calls for the last 24 hours. (I had not realized that promotion of pornography was such an important issue with Anonymous – the group that has been hacking many corporate and government websites!)

I now fear for Dawn’s safety.

Can you imagine the depths of depravity of the attackers? What did Dawn do but bravely stand up for what is right – when no one else would! Her attackers are outraged and are urging public support for the man and for the right to view pornography on airplanes.

Now our office is under attack as well. We had to take down our websites temporarily to prevent these people from doing what they said they would do – hack them. Many are also calling our office with harassing messages.

We have instituted security measures to protect Dawn and our staff. We are in contact with the FBI. That is all I can say on this so far.

When Dawn and our staff got involved in this fight, we all knew that we were up against many distorted people. We recognized that this would not be easy.

We want you to know that bullying tactics will not stop us from declaring the truth - that PORNOGRAPHY HARMS! Not only have millions of lives been harmed, but there is now a wealth of evidence - scientific proof - that pornography is wreaking havoc on our society. It seems that NO FAMILY is untouched.

We will not let the pornographers and their patrons to win this war. Please continue your support and help spread the word to other supporters.

We are grateful for the support of so many of you – YOU know what we are up against. In addition to the hateful messages and threats, we have received many messages of support and encouragement. A majority of Americans are on our side.

Please keep Dawn and our staff in your prayers.