Remarks by the President at National Catholic Prayer Breakfast 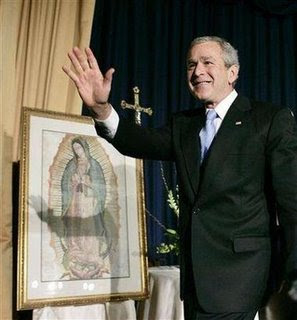 THE PRESIDENT: Thank you for the gracious welcome. Austin, thanks for your kind introduction. Thanks for giving me this unusual speaking opportunity. I understand that this program builds up to another speech. (Laughter.) It's not every day you get to be the warm-up act to the Holy Father. (Laughter.) I'm honored to be here. I do thank Austin for his leadership for the Catholic Prayer Breakfast. I thank the Board of Directors for having me. I thank Archbishop Gomez, tejano, for being here. And I want to thank Bishop Finn, members of the clergy. Thank you for serving our country. Thank you for being men of faith.

This has been a joyous week. (Applause.) It's been a joyous time for Catholics -- and it wasn't such a bad week for Methodists, either. (Laughter.) The excitement was just palpable. The streets were lined with people that were so thrilled that the Holy Father was here. And it was such a privilege to welcome this good man to the United States.

He is courageous in the defense of fundamental truths. (Applause.) His Holiness believes that freedom is the Almighty's gift to every man, woman and child on Earth. He understands that every person has value, or to use his words, "each of us is willed, each of us is loved, [and] each of us is necessary." (Applause.)

The Holy Father strongly believes that to whom much is given much is required -- and he is a messenger of God's call to love our neighbors as we'd like to be loved ourselves.

I've seen how American Catholics are guided by these truths. One of the blessings of being the President is I get to see firsthand how people are motivated by the fundamental truths articulated by the Holy Father. I've watched you live out the Gospel through countless acts of compassion and courage. I've joined with you in striving to heed the Scriptures' noble calling: to see God's image in all mankind, and to uphold the dignity of each human being on Earth. (Applause.)

Together, over the nearly seven and a half years we've worked to uphold the dignity of human life. Over the last -- over the last years, my administration has put a stop to U.S. tax dollars funding foreign groups that perform or promote abortions. (Applause.) We've worked together to protect unborn victims of violence, and to end the barbaric practice of partial-birth abortion. (Applause.) We have stood fast in our belief that promising medical advances can co-exist with ethical medical practices. (Applause.) Last November, scientists discovered a way to reprogram adult skin cells to act like embryonic stem cells. This is a significant breakthrough, because science -- scientists have found a path that can lead beyond the divisive debates of the past -- and extend the healing potential of medicine without destroying human life. (Applause.)

Together, we've worked to strengthen America's lifelines of learning -- including our nation's Catholic schools. The Catholic Church has a proud educational tradition dating back centuries, and one of the Holy Father's priorities has been maintaining this tradition in the United States. Today, America's Catholic schools serve thousands of students -- both Catholic and non-Catholic -- in some of our nation's poorest neighborhoods. They help minority students narrow the achievement gap. They prepare children for lives of character and purpose and success. And yet these schools are closing at an alarming rate: nearly 1,200 Catholic schools have shut their doors since the year 2000.

In my State of the Union address this January, I proposed a new $300 million program called Pell Grants for Kids. And the reason I did so is because I want to help low-income children in underperforming public schools be able to attend a private or parochial school of their choice. (Applause.) I am concerned about the loss of a major national asset, and that is the decline of Catholic schools, particularly in inner- city America. And to this end, next week we're having a White House Summit on Inner-City Children and Faith- Based Schools. (Applause.) And the purpose of the summit is to highlight the lack of educational options facing low-income urban students. And we're going to bring together educators and clergy and philanthropists and business leaders, all aiming to urge there to be reasonable legislation out of Congress and practical solutions to save these schools -- and more importantly, to save the children. (Applause.)

And some of the people trying to save America's Catholic schools are here at this prayer breakfast, and I can't thank you enough for your efforts. (Applause.)

Together, we've worked to foster a culture of tolerance and peace. We believe that religion should be a source of understanding and grace -- not a source of extremism and violence. On his visit and throughout his time as the Holy Father, the Pope has worked to foster inter-religious dialogue, and to heal the wounds of religious conflict. I strongly support the Pope's call for religious freedom around the world. I share his concern for Christians in the Middle East, and his desire to see a peaceful and independent Lebanon. I respect his scholarship, which demonstrates that faith and reason can co-exist. And I join him in praying for a world at peace, where Christians and Muslims and Jews, believers and non-believers, can live side by side. And I thank all of you here who work to make this hopeful vision a reality. (Applause.)

Together, we've worked to bring comfort to troubled souls. We believe that where hearts are burdened by destitution and disease and despair, we must answer with hope and love and faith. We know that [no] government program can answer the call like our armies of compassion can -- but we also know that government programs can support, and must support, their work. And so I've been a strong believer in faith- based and community based effort to bring healing and hope to people who wonder whether or not there's a bright tomorrow.

I don't know if you really realize this, but in 2006, 3,000 direct federal grants totaling more than $2 billion were made to faith-based organizations -- including many Catholic organizations. (Applause.) And the reason why is because Catholic organizations provide shelter to the homeless in very effective and loving ways. They tutor at-risk youth. They help children of prisoners, while at the same time they work tirelessly to help prisoners get back on their feet. These groups seek out our society's most vulnerable and fulfill Christ's promise that "the last shall be first."

Abroad, Catholic organizations are a vital part, an integral part of our effort to fight hunger and disease from Latin America to the continent of Africa. In these places, Catholic groups have a hand in what some call the "Lazarus Effect," where whole communities that once lay dying are brought back to life.

Oftentimes people ask me, why is it that you're so focused on helping the hungry and diseased in strange parts of the world? My answer is, we're a wealthy enough nation to take care of people at home and to help those abroad; it is in our moral interests that when we find people suffering that we do all we can do to help ease the burden; it's in our national interests -- (applause) -- and it's in our national interests that we defeat the ideologues of hate with an ideology of hope.

During these -- as President I've seen some of the great wonders of compassion as a result of our Catholic citizens. I've seen them here in Washington, with the Little Sisters of the Poor. (Applause.) Laura and I had the honor of visiting with the Little Sisters and, you know, I was struck by how hard they worked to ask [for] money to care for the old and sick, so that the old and sick don't have to beg for money.

I've seen these wonders of Catholic love on the Gulf Coast. I'm struck by the Catholic educators that in the face of unprecedented disaster worked night and day to provide good and stable schools for the children, and provide comfort for, you know, people that were just wondering whether or not there was going to be a good tomorrow.

I've seen wonders on the Sea of Galilee during my recent trip to the Middle East. On a recent visit my guides were joyful Catholic nuns who preserve the holy sites for all mankind -- even as they struggle with the dangers to the region's Christian minority.

I've seen these wonders in Africa, in an emergency -- in a hospital supported by PEPFAR. In February, I saw a 9-year-old girl who is HIV-positive, who had lost both her parents to AIDS. And for the last year, Catholic Relief Services had been paying for the girl to receive treatment at the clinic. I want to tell you what her grandmother said: "As a Muslim, I never imagined that a Catholic group would help me like that." She went on to say, "I am so grateful to the American people." And I am grateful for those who provide love and compassion in America and around the world. (Applause.)

This is a prayer breakfast. And this is a perfect place for me to say how much I appreciate the prayers of the people for me and Laura. I can't thank our fellow citizens enough for taking time out of their lives to lift us up for prayer. I have finally begun to understand the story of the calm and the rough seas -- (laughter) -- and I believe -- I believe in my heart of hearts that it's because of the prayers of my fellow citizens.

And today with the trust in the Lord's wisdom and goodness, I offer prayers of my own: for each gathered in the room, for the safety and success of the Holy Father's visit, and for God's continued blessings on our great land. Thank you. (Applause.)