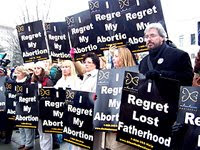 STATEN ISLAND, New York, July 21 /Christian Newswire/ -- The fact that more and more Americans know women who have had hurtful abortion experiences is reflected in a new Marist College poll say leaders of the Silent No More Awareness Campaign (SNMAC), the world's largest network of individuals harmed by abortion.

"When over half of the American public says that abortion does a woman more harm than good, that is the result of women opening up to loved ones about their abortion traumas," said Georgette Forney, co- founder of SNMAC. "The public isn't getting that message from the mainstream media; they're getting it from 'Silent No More' post-abortive women."

In the Marist Poll, 53 percent of respondents said that abortion does a woman more harm than good, while 26 percent said it improves a woman's life.

"Our message is resonating," added Janet Morana, also a co-founder of SNMAC. "The abortion industry and its apologists can make all the false claims they want about abortion having no impact on women's physical and emotional health. Real life is telling a far different story."

Since the launching of the Silent No More Awareness Campaign in 2003, 2,859 women and men have shared their testimonies publicly at over 466 gatherings in 44 states and eight countries where more than 68,000 spectators have heard the truth about abortion's negative aftereffects. More than 6,200 people are registered to be Silent No More. Raising awareness about the hurtful aftermath of abortion and the help that is available to cope with the pain are two of the Campaign's goals.

The Silent No More Awareness Campaign is a joint project of Anglicans for Life and Priests for Life. For more information, please visit our website:www.SilentNoMoreAwareness.org