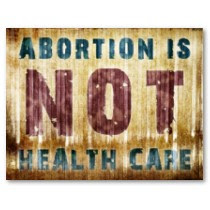 With the House of Representatives set to vote on a healthcare bill this week, activists will be working to ensure that taxpayer funded abortions and not part of this legislation.

The following is a partial list of 'Abortion is Not Healthcare' events:

Sunday, July 26, at 6:30 P.M.
Outside of the office of Speaker of the House Nancy Pelosi, on 1st and Independence Streets SE, in front of the Cannon Office Building
A prayer vigil to kickoff "Abortion is Not Healthcare" week.

Monday, July 27, at 10:30 A.M.
Outside the Cannon Office Building, at 1st and Independence SE
A news conference with Dr. Alveda King, Dr. Johnny Hunter, Rev. Broden and other African-American leaders to discuss the tragic impact taxpayer funded abortions will have on the African-American community. The leaders will be speaking out against the funding of Planned Parenthood because of their racist agenda.

Monday, July 27, (TBA)
Bowling Green, Virginia
A demonstration and pro-life witness led by young women challenging the First Lady, Michelle Obama, to embrace human rights and social justice and stand against taxpayer funded abortions. The demonstration will be at Caroline Family Practice clinic in Bowling Green Virginia. The First Lady will be participating in a ribbon cutting ceremony at the clinic

Prayer for all the members of Congress. Teams will walk through the office buildings.

Wednesday, July 29, 10:30 A.M.
Cannon Office Building
Pray-in at Speaker Pelosi's office. Pro-life activists will risk arrest by holding a "pray-in" at Speaker Pelosi's office. They will be praying for social justice and against taxpayer funded abortions. The activists will also be standing in solidarity with the 53,000,000 children that have died through abortion and the women who have been diminished through abortion.

Rev. Patrick J. Mahoney, Director of the Christian Defense Coalition, and one of the organizers of the event states,

"'Abortion is Not Healthcare' is a public, prophetic witness calling upon Speaker Pelosi, President Obama and the members of Congress to embrace human rights and stand against the violence of abortion.

"If the President and Speaker have their way, every American will be forced to pay for the killing of innocent children through taxpayer funded abortions. Health care reform should be about healing and community not violence and the crushing of human life.

"Our message this week will be clear; not one penny for taxpayer funded abortions in healthcare.

"We will also be passionately praying all week in all the House Office Buildings that abortion has no place in health care. We are asking the pro-life and faith community across the nation to join us in prayer as we seek God for mercy and justice."