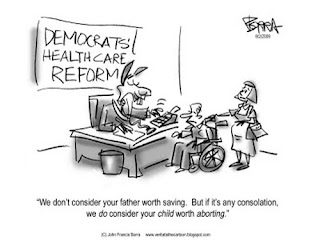 [Cartoon by John Francis Borra, http://veritatisthecartoon.blogspot.com/, who can be reached at veritatis@eaglecom.net.]
There is still time to ACT!
It is still possible to prevent abortion funding with taxpayer dollars in the efforts to reform health care. Even though one proposal passed out of the Senate Finance Committee last week over the objections of pro-life senators, various other proposals must be harmonized before there can be a final vote. It looks like that is still far away. This give us time to act!
Since 71% of the American people oppose taxpayer funded abortion, the Dem's scheme to bail out a failing abortion industry could still sink the health care proposal altogether.