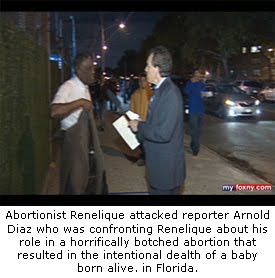 NEW YORK, Nov. 12 /Christian Newswire/ -- A New York television news station has released a shocking expose in its "Shame, Shame Shame" segment on abortionist Pierre Relenique, whose Florida medical license was revoked for his part in a botched late-term abortion that resulted in a live birth and for falsifying medical records to hide the fact that the baby was born alive then intentionally killed.

The news reporter, Arnold Diaz, discovered that Renelique had moved to New York and is working at the Clinton Place Medical Center in the Bronx. A receptionist at that clinic insists that Renelique is not doing abortions there.

The Florida Medical Board forwarded their revocation order to the New York authorities for similar disciplinary action, but instead the board placed Renelique on supervised probation for two years.

Diaz is shown in the report jogging behind Renelique as the abortionist denies that he ever did anything wrong even though the reporter had the Florida disciplinary documents in hand.

At one point he turned and attacked Diaz, grabbing the microphone from his hand and slamming it into the street.

"The Florida Health Department got it right when it declared Renelique a danger to the public," said Operation Rescue President Troy Newman, who has been reporting on Renelique since 2006. "It is unconscionable that this man is allowed to continue the practice of medicine."

At another point in the interview Renelique told Diaz that he did not answer calls from the clinic for help when his late-term abortion patient was in labor because he had scheduled her for 2:00 and he insisted that he would do the abortion in his own time, not hers. But the woman delivered the baby early, prompting unlicensed abortion worker Belkis Gonzalez to cut the baby's cord with desk scissors, shove the struggling baby into a biohazard bag, and then conceal the body on the roof of the clinic. Gonzalez has been criminally charged in that case and is awaiting trial.

"We demand that the New York medical board to reopen Renelique's case and immediately revoke his license. A man with this kind of temper and lack of concern for women should not be allowed to touch a patient," said Newman. "We also want to thank Arnold Diaz for his amazing investigative reporting."