Video: Forced Abortion Victim Says Hodari 'Ripped the Life' Out of Her 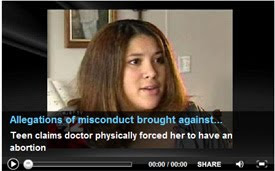 FLINT, Mich., Nov. 23 /Christian Newswire/ -- An ABC affiliate aired today a video interview with Caitlin Bruce, the woman who has sued abortionist Abraham Alberto Hodari for committing a forced abortion on her. Bruce appeared on camera and said that she changed her mind and withdrew her consent after viewing an ultrasound image of her baby.

"He told his assistant, you know, 'Hold her down.' You know? They had my arm pinned, his weight was all on my chest, and then he took his hand and he had it so tight on my mouth that it was muffled. I was screaming and I was crying," said Bruce.

"They ripped the life out of me that day."

Hodari denies any wrong doing, but in the meantime, he has put his abortion clinics up for sale along with his expensive classic car collection, and filed for a hasty divorce from his wife of 29 years. Many local pro- lifers, including Judy Climer of Flint Right to Life, who has been working with Operation Rescue in a joint effort to expose Hodari, believe that the liquidation of assets may be a precursor to his fleeing the country.

"Hodari is a menace to the public and the sooner he is held accountable for his atrocities in a court of law, the better," said Operation Rescue President Troy Newman. "It is shocking and wrong that this quack is still in business. We ask that the Michigan Attorney General's office launch a criminal investigation into Hodari's shop of horrors, and we will be filing a formal request to that effect this week."