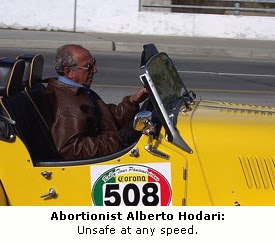 LANSING, Mich., Nov. 30 /Christian Newswire/ -- Operation Rescue has filed formal complaints against abortionist Alberto Hodari with the Michigan Attorney General's office and with the Michigan Department of Community Health, asking for investigations in to criminal misconduct in the alleged forced abortion of Caitlin Bruce last year.

Ms. Bruce filed a civil suit against Hodari in June. In her suit, she says she withdrew her consent for an abortion after seeing her baby on an ultrasound. She accuses Hodari and his assistant of holding her down and covering her mouth to muffle her screams while Hodari viciously forced an abortion upon her.

"We have filed the appropriate complaints to insure that the correct authorities are also investigating possible criminal charges and causes for discipline against Hodari's medical license," said Operation Rescue President Troy Newman.

Judy Climer, director of Flint Right to Life, has also filed a separate, similar complaint with the Michigan Attorney General.

Bruce never filed her own criminal complaint because "she was young and knew it wouldn't bring her baby back," according to a story that appeared Sunday in the Flint Journal.

"While these complaints are too late to help Ms. Bruce, they may serve to prevent this horror from being inflicted upon other women," said Newman. "In fact, evidence shows that Hodari has likely forced abortions on women for at least two decades."

The Flint Journal article indicated that an abortion clinic employee present during Bruce's abortion said in a statement that was filed with the suit that Hodari told Bruce that he would not do her abortion and was sending her home, but instead forced the abortion on her. He then grinned as he completed the abortion.

Another woman recently told of a similar experience with Hodari in 1988. Jennifer McCoy never considered abortion and had been taken to Hodari's clinic at age 16 under the pretence of receiving a routine obstetrical examination. Hodari assured her that he was only examining her to determine how far along she was, when suddenly Jennifer felt the sharp pain of the abortion.

"These two accounts are far too similar to be a coincidence," said Newman. "Even though Hodari denies any wrongdoing, he has also made it clear that he believes abortionists have a 'license to lie.' We are convinced that he lied to Mrs. McCoy, he lied to Ms. Bruce, and now he's lying about his culpability in these horrific crimes. Hodari's behavior is that of a maniac that has likely been abusing women for at least 20 years. It is time that the legal system brings his reign of terror to an end."

Operation Rescue is one of the leading pro-life Christian activist organizations in the nation and has become a strong voice for the pro-life movement in America. Operation Rescue is now headquartered in a former abortion clinic that it bought and closed in 2006. From there, Operation Rescue launches its innovative new strategies across the nation, exposing and closing abortion clinics through peaceful, legal means. Its activities are on the cutting edge of the abortion issue, taking direct action to stop abortion and ultimately restore legal personhood to the pre- born in obedience to biblical mandates.