Baby Without a Brain : A Miracle Story 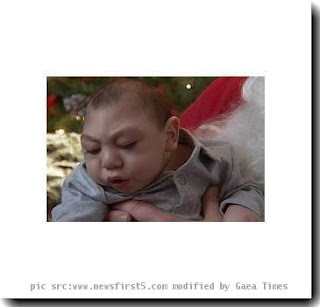 Pueblo, Colorado - Nicholas Coke, a baby boy from Pueblo is a living miracle. He was born with no brain. He can't see, hear, crawl or suck, but still managed to make a history. This week he has completed his one year's tough fight for survival.

The disease Nicholas was born with is called Anencephaly. It's agenetic disorder in which a person has no brain, just a brain stem. Anencephaly is a defect in the closure of the neural tube during development in the womb. The neural tube is a narrow channel that folds and closes between the third and fourth weeks of pregnancy, forming the brain and thespinal cord. In rare cases, one end of the neural tube does not close. This results in the absence of a major part of the brain, skull, and scalp.

Anencephaly occurs in about 1 out of 10,000 births, although the exact number is not known because many of these pregnancies result in a miscarriage, according to the National Institute of Neurological Disorders and Stroke.

The cause of anencephaly is unknown, although the mother's diet, including an insufficient intake of folic acid, may play a role. Most scientists, however, believe many other factors are also involved.

Nicholas, the miracle child has survived without doctors, or tubes. Her mother Sheena told that he even showed sign of emotion. It was his first smile that brings solace to her poor mother.

They are celebrating every moment as they didn't know when that fateful moment would come and they had to witness their child breathing his last breath.

We wish Nicholas a Happy Birthday and Merry Christmas. May God bless him.

From http://blog.taragana.com/
Posted by Deacon John at 7:42 PM