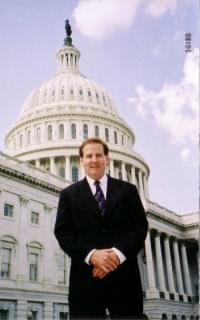 Schiffer's legislation would leave in place all regulation of genuine pollution but exclude carbon dioxide from the definition of a pollutant in all Federal laws. This would strip the EPA of authority to regulate the carbon dioxide which plants breathe. It would also over-turn the April 2007 ruling by the U.S. Supreme Court in Massachusetts v. EPA. Because the Supreme Court was only interpreting environmental laws, Schiffer's Bill will overturn that decision.

Schiffer explained: "All life on Earth depends on carbon dioxide. Plants breathe carbon dioxide as the lifeblood of plant growth. Animals cannot exist without plants for food. Carbon dioxide is a harmless, colorless, odorless part of the air that nourishes plants. The EPA's decision makes as much sense as calling dihydrogen monoxide a pollutant."

Schiffer attacked the myth of man-made global warming: "Political activists masquerading as scientists violate the Scientific Method. True science is violently opposed to 'consensus' of opinion, and devoted to hard, cold, test results that might shatter consensus. Science is based on repeatable experiments. No experiment has ever shown that man- made carbon dioxide affects the Earth's temperature. In geologic history, CO2 increased about 800 years AFTER warming trends. The Earth has cooled since 1998."

The Bill is at:
www.PaulSchiffer2010.com

Paul Schiffer, a former Marine, has been a leading conservative figure for 15 years as a radio talk show host heard throughout Ohio and nationwide. He has been prominent in the "Tea Party" protest campaign. Ohio's "Tea Party" movement is one of the nation's largest.

From 1994 through 1997, Paul worked in government affairs for The Better Government Bureau, based in Canton, Ohio. Led by Canton's Ben Suarez, Rodney Napier, and Kenneth Nickalo, the BGB challenged liberal government officials and bureaucracies, including the FDA, EPA, Department of Labor, the United Nations, Hillary Clinton's socialized medicine agenda, and over-reaching State officials.

Schiffer previously ran for State legislature, and in 2008 vied for the Republican nomination for Congress. Schiffer was a Prolife leader in Ohio, head of Witness For Life and Director of the Right to Life Society of Cleveland.