The Family in America Assesses Impact of Federal Family Planning and the 'U.S. War on Fertility'

Defunding Planned Parenthood is Only Part of the Story

The Family in America Assesses Impact of Federal Family Planning and the 'U.S. War on Fertility' 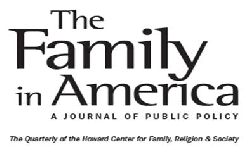 WASHINGTON, Feb. 24, 2011/Christian Newswire/ -- Defunding Planned Parenthood is only part of the story regarding taxpayer funding under Title X.  The negative social effects on women, children, and families and the economic impact from Title X have not even been discussed during the current national propaganda campaign by Planned Parenthood and its allies over its defunding in the Continuing Resolution amendment offered by Congressman Mike Pence.

Those essays include Robert W. Patterson's feature linking the ruinous social effects of federal family planning to the failures of the War on Poverty; Jennifer Roback Morse's examination of the incoherence of federal "sex" policy; and Allan C. Carlson's examination of how changing Protestant attitudes toward contraception paved the way for "population control" measures like Title X.  Learn more atwww.familyinamerica.org.

The issue also carries a fitting analysis, "From Anthony Comstock to Jocelyn Elders," a review by Charlotte Allen of Alexandria M. Lord's Condom Nation, as well as Bryce J. Christensen's look at polarization of American life in his joint review of Bill Bishop's The Big Sort and Naomi Cahn and June Carbone's Red Families v. Blue Families. Also reviewed, by Robert W. Patterson, is James T. Patterson's Freedom Is Not Enough. The issue also contains 20 "New Research" commentaries that glean insights from the latest empirical studies that confirm the positive social, health, and economic outcomes of life-long marriage and the child-rich family.

Robert W. Patterson's lead feature not only explores the dubious genesis of Title X but also demonstrates how the track record of dramatic increases in unwed childbearing since 1970 indict Nixon's scheme to reduce "untimely and unwanted childbearing" as just another tragic experiment in social engineering. The journal's editor also exposes the disingenuousness of the public-heath establishment in defending its vested interests, explaining why questionable estimates of the theoretical construct of "unintended pregnancy" provides no basis for the formulation of sound public policy.

Jennifer Roback Morse's essay explores the incoherence of federal efforts to reduce American fertility (through both Title X and Medicaid) and the Supreme Court's 1972 Eisenstadt "right to privacy" decision that allegedly demanded that the government remain neutral in matters of sexual behavior, marriage, and childbearing. The noted economist also explains how, when coupled with the 1973 Court decision creating an unrestricted right to abortion, that incoherence dramatically weakened normative expectations of marriage, leaving young unmarried woman vulnerable to the sexual exploits of men.

Allan C. Carlson places the entire federal experiment with family planning into historical and cultural perspective, documenting how American Protestants -- and particularly evangelical Protestants -- reversed their historic opposition to birth control in the 1960s, a cultural shift that dramatically lessened public opposition to the U.S. War on Fertility.

All three feature authors (Patterson, Morse, and Carlson) are available for interviews, which can be arranged by contacting Larry Jacobs at (815) 222-2490 orlarry@profam.org.  Visit www.profam.org/THC/thc_member.htm for more information on becoming a member of The Howard Center for Family, Religion & Society or to receive a subscription to The Family in America.

The Howard Center for Family, Religion and Society (www.profam.org), located in Rockford, Illinois is an independent, non-profit research and education center (think-tank) that strives to be the leading source of fresh ideas and new strategies for affirmation and defense of the natural family, both nationally and globally.  The Howard Center is also the organizer of the World Congress of Families project which unites people of goodwill who recognize that the family is the fundamental unit of society and coordinates the efforts of pro-family groups from more than 60 countries worldwide.