Why Joe Scheidler Trusted a Man Who Killed 75,000 Babies

Why Joe Scheidler Trusted a Man Who Killed 75,000 Babies 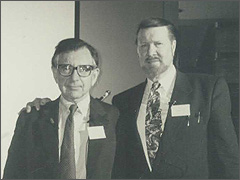 The pro-life movement lost a powerful voice in defense of unborn children in the recent death of former abortionist Dr. Bernard Nathanson.

Along with Lawrence Lader he had founded NARAL (then called the National Association for the Repeal of Abortion Laws). He had performed abortions enthusiastically for many years, directed the largest abortion facility in the Western world, and by his own accounting was responsible for 75,000 deaths. As difficult as it is to say now, at the time of his pro-life conversion many years ago, I did not quite trust him. I was skeptical of his story that he didn't realize abortion was the taking of a human life until he saw an ultrasound. Perhaps he just seemed too matter-of-fact about what he'd done, without the contrition that his role in the abortion business would warrant. Most pro-lifers accepted him with open arms, but when others stood and applauded at his presentations, I sat quietly. Then one day in Indianapolis, I saw him in the lobby of the hotel where we were both staying, and he asked me if I would like to have a talk. We sat down together and I told him frankly of my misgivings. For some time he sat in total silence. And then he said, "Joe, do you realize what I have to face some day-75,000 lives on my conscience? If I would admit outright the horror of what I was doing, I could not live with it. Someday I will face my judge with all those lives on my conscience. It's almost too difficult to admit what I have done, so I have to approach my conversion in a way that will help me keep my sanity." I could see in his face that he was sincere-that his role as an abortionist and abortion promoter weighed on him more than he could express-and the only feeling I had for him was compassion. From that time on, we became good friends. Shortly after that conversation, Nathanson told me that I could call him any time, and he would attend any conference I wanted him to address, at no charge. He was true to his word. I saw him once in New York and asked if he would do an interview for one of our Meet the Abortion Providers videos, and he joined us immediately. Whatever his plans might have been, he changed them to assist a fellow pro-lifer and a friend. When I got a call from him in December 1996 asking if I could attend his baptism, confirmation, and first Holy Communion at St. Patrick's Cathedral, he was the happiest I had ever heard him. He later said that since becoming a Catholic, he had found a peace he had never known before. He had been forgiven. In later years, as his health deteriorated and he became less actively involved in the pro-life movement, I lost contact with him. But he was still very much in my prayers. Dr. Bernard Nathanson was a modern-day Saint Paul. Just as Paul had persecuted the early Church, only to become her greatest advocate, Nathanson turned away from the abortion movement he helped found to become one of the foremost champions of unborn children. May his great soul now rest in peace.
Posted by Deacon John at 12:05 PM